By Grant Segall
Captain Guy Zierk, District Injured Support Coordinator (DISC) for the Marine Corps Wounded Warrior Regiment (WWR) and retired Marine Gunnery Sgt. Travis Brill paid a special visit to retired Marine Sergeant Shurvon J. Phillip on May 23, 2014. This visit was extremely special for Sgt. Phillip, a combat wounded Marine and the son of an immigrant family, as the Marines were there to install a new flagpole and flags to fly in honor of the upcoming Memorial Day holiday. Through the WWR, the Marine Corps provides life-time support to wounded, ill, and injured Marines and their families, and continues to support Marines once they become veterans through regular outreach calls from the Sergeant Merlin German Wounded Warrior Call Center and face-to-face support from District Injured Support Coordinators. Through the outreach calls and face-to-face support, the regiment is able to support veterans by conducting needs assessments, connecting them to resources, and aiding them in achieving their long term recovery goals.

An Iraqi land mine severely injured him in 2005, leaving him paralyzed and unable to speak. According to his mother and guardian, doctors said the reservist would never move again and probably won't live more than a year or two.

But the gung-ho Marine proved them wrong. He learned to type, play video games and brush his teeth. With help, he managed to work out, walk and ride a bike.

Phillip survived many surgeries and infections, a common problem for paralyzed patients, but died on Oct. 30 at the Louis Stokes VA Medical Center in Cleveland.

"We got 11 years of borrowed time," says Bill Bailey, a Navy reserve judge advocate and Phillip's legal guardian through a nationwide program to help the wounded.

Phillip was the 49th member of a battalion based in the Cleveland suburb of Brook Park to die from wounds incurred during a tough tour of Iraq, where the Third Battalion, 25th Regiment, Fourth Marine Division fought 900 to 1,200 strong.

Staff Sgt. Derick Young of Canfield, Ohio, was wounded by the same mine that injured Phillip. Young says Phillip "continued to fight and fight and fight, like a typical Marine. We're stubborn like that." 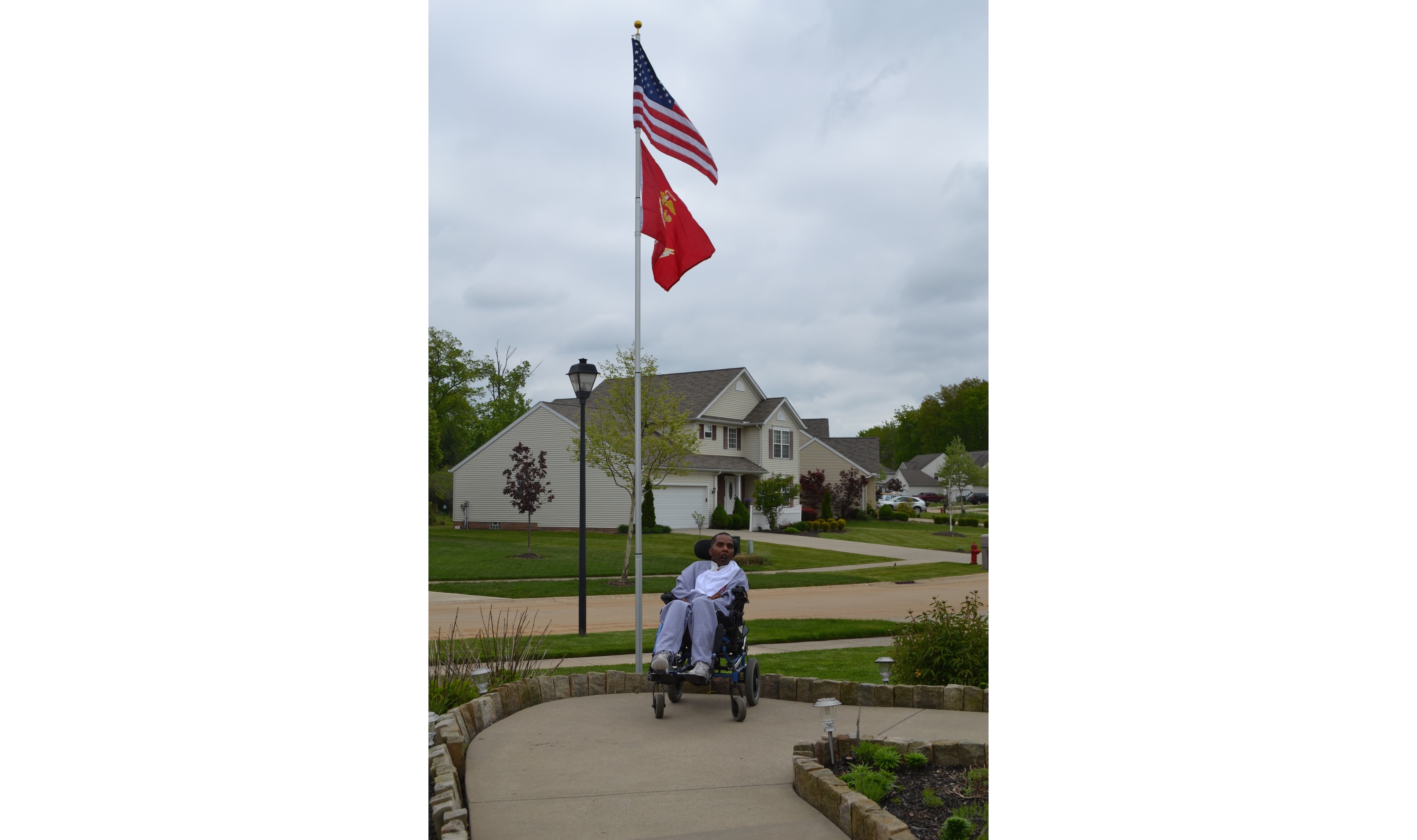 Capt. Guy Zierk, district injured support coordinator for the Marine Corps Wounded Warrior Regiment, and retired Marine Gunnery Sgt. Travis Brill paid a visit to retired Marine Sergeant Shurvon J. Phillip on May 23, 2014. They visited Sgt. Phillip, a combat wounded Marine and the son of an immigrant family, to install a new flagpole and flags to fly in honor of the upcoming Memorial Day holiday.
Photo Credit: Marine Corps Wounded Warrior Regiment
Phillip's mother, Gail Ulerie, who took care of him at their home in Richmond Heights, says he smiled often and loved life. "Even though his injuries got the better of him, he never let them get him down. He was always ready to go anywhere. He would never say no."

Ulerie said of her son, Sgt. Shurvon Phillip: "He was the proudest Marine ever."

Phillip was the third of four children born in Trinidad. The family moved to East Cleveland when he was about 11. He became an honor student at Shaw High School, studied information technology at Cuyahoga Community College and joined the 3/25 Marines meanwhile.

"Oh my gosh," says Ulerie, "he was the proudest Marine ever. He wanted to serve the country that he was now calling home."

When the 3/25 was deployed to Iraq, "he assured me that everything was going to be OK."

On May 7, 2005, Young was commanding a Humvee with Phillip and three other Marines inside. They were returning to their base from observations when they hit a mine. The blast injured all five. It damaged Phillip's brain, collapsed his lungs, broke his jaw, foot and more.

Phillip spent more than a year in different hospitals. At the National Naval Medical Center in Bethesda, Maryland, President George W. Bush pinned a Purple Heart on the Marine and promised to make him a U.S. citizen. The promise was fulfilled a year later.

Phillip eventually returned to his mother's small apartment on a high floor in East Cleveland. Soon the Veterans Administration bought the family a wheelchair-accessible home in Richmond Heights.

He remained a proud Marine. "He loved putting on his dress blues," says Ulerie. "He'd sit up straighter."

With paid help, Ulerie took care of her son around the clock. With more help, he loved to work out in the gym, ride a two-person bike outdoors, travel in a horse-drawn cart at a therapeutic stable or cuddle with Polly, his shih Tzu. He never spoke again but developed facial signals, such as raising his eyebrows for "Yes."

Someone once asked Phillip if he would have enlisted knowing the outcome. Usually, he paused before answering questions. This time, he raised his eyebrows for "Yes" right away.

Ulerie once asked him what he missed the most before his injuries. He typed, "Marines."

Phillip worked out at ATP Evolution in Warrensville Heights with trainer Dan Medves. "He had the biggest smile, loved working up a sweat," says Medves.

Last month, Phillip returned to the Louis Stokes VA Medical Center with a fever and yet another infection. He died four days later. His VA doctor reported the cause of death as "homicide" from "war injury with explosive device."

No other 3/25 members are known to have died at home from Iraqi wounds. The other 48 fatally wounded members died instantly or soon afterward.

Delayed deaths have occurred in other military units. But Bailey, once a staff lawyer for the Navy's Wounded Warrior Project, said he's never seen a combat death delayed as long as Phillip's.

Phillip loved Christmas, so she bought more decorations this year. "Every Thanksgiving, when we were done eating, he'd say, "Let's put up the Christmas thing."

Information from: The Plain Dealer, http://www.cleveland.com

More In Salute to Veterans

A series of commemorations are honoring the nearly 160,000 troops from Britain, the United States, Canada and elsewhere who landed in Normandy on June 6, 1944.

Retired Marine Sgt. Maj. John L. Canley had received the Medal of Honor in October 2018 for heroic actions in Hue City, Vietnam, in 1968.

His daughter plans to bury him wearing his new, replacement Army uniform, as he requested.

“Information is key to gaining advantage in all domains, whether during kinetic actions on the battlefield or during day-to-day operations in competition,” said Gen. David Berger, the Marine Corps commandant.

The VA currently does not offer the procedure or counseling to patients seeking to get an abortion.

US to boost military presence in Europe for Russia threat

Biden announced the permanent basing of a U.S. military garrison in Poland. He also said the U.S. is sending two additional F-35 fighter jet squadrons to the U.K. and more air defense and other capabilities to Germany and Italy.

Military hospitals performed fewer than 100 abortions between 2016 and 2021.

Retired Generals push back on plan to redesign how Marines fight

The Army's plan to increase its power | MilTech

James Mattis gets married — leaving behind his love, the Marine Corps