The commandant of the Marine Corps wants to vastly expand the fielding of infantry automatic rifles by putting them in the hands of nearly every "0311" rifleman.

The Corps’ IAR — currently the M27 made by Heckler & Koch — could ­replace the standard-issue M4 carbine for thousands of Marines.

"Most Marines like it, and so do I," Marine Corps Commandant Gen. Robert Neller told Marine Corps Times. Neller has not made a decision as to whether he will put any additional IARs in infantry squads.

"Everything I have seen suggests that the M27s we have been using for some time have been the most reliable, durable, and accurate weapons in our rifle squads," Neller said in a ­statement.

The Marine Corps started fielding more than 4,000 M27 IARs back in 2010, initially thinking they would replace the M249 squad automatic weapons. But ultimately the Corps decided it needed both weapons, and the IARs use among grunts has been limited.

Now Neller is looking at the IAR as a high-performance service weapon for all riflemen in the infantry.

"I am considering it, but we have to balance improved capabilities and increased lethality with cost," Neller said.

That’s why it’s unlikely that the ­high-performance rifles would be issued to other infantry Marines, such as ­mortarmen, machine gunners or ­Marines who specialize in anti-tank rockets and demolitions.

"I believe that our infantry Marines should be the most lethal force we can afford. Our Marine infantry squads, based on their mission — locate, close with and destroy the enemy by fire and maneuver or to repel the enemy’s assault by fire and close combat — should be armed and kitted out differently than other Marines," the commandant said.

"If we decide to put IARs throughout the rifle squads, we would not arm the squad leader with it, nor the platoon sergeant and platoon commander. Just the 0311 infantry Marines in the rifle squad," he said.

Marine Corps Systems Command recently asked the firearms industry which weapons they have that meet the IAR’s requirements, along with the cost and timeline for producing 11,000 of them.

The 11,000 figure represents the number of Marines in the infantry occupational field who would shoulder a rifle. They would be part of companies and fire teams, said Ryan Smith, the Marine Corps Systems Command’s acting product manager for infantry weapons.

"The commandant has expressed interest that he would like to see a different rifle for the infantrymen, but we don’t know what capabilities exist out there," Smith told Marine Corps Times. "So this is strictly just a pinging of industry to see: Hey, what have we overlooked or not seen or not heard of since we released the M27 IAR."

Initially the Corps thought the M27 IAR could replace the M249 squad automatic weapon. It is far lighter — about nine pounds, compared to a 23-pound SAW. And the M27’s free-floating barrel and precision trigger makes it more accurate.

But the M249 SAW is a light machine gun that can put more rounds downrange far more quickly. The M27 has a 30-round magazine, compared to the SAW’s 200-round drum. The M27 rifle fires about 40 rounds per minute, compared with SAW’s sustained rate of fire of 85 rounds per minute.

For years, many Marines had serious doubts about whether Marines could use a more lightweight automatic rifle to provide effective suppressing fire in combat. 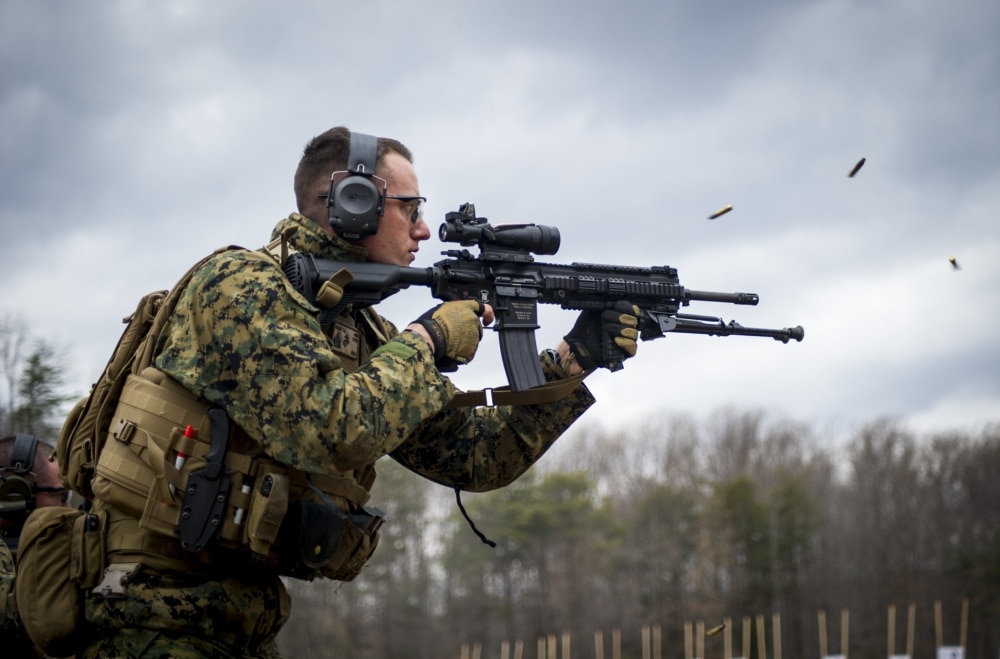 U.S. Marine Sgt. Travis Riggs with the Marine Security Augmentation Unit field tests the M27 infantry automatic rifle at Marine Corps Base Quantico, Va. in 2014. The M27 made by Heckler & Koch could replace the standard-issue M4 carbine for thousands of Marines.
Photo Credit: Staff Sgt. Ezekiel R. Kitandwe/Marine Corps
"Let’s talk about suppression and the psychology of a small-unit fight, that says that the other guy’s got a light machine gun and I’ve got an automatic rifle," ­former Commandant Gen. James Conway said in 2010.

"I’m going to be hard-pressed to get fire superiority over him, you know, to keep his head down instead of him keeping mine down, because that 200-round magazine just keeps giving," Conway said.

But over the years, Marines have come to prioritize accuracy. In April 2011, the IAR got its first taste of combat when Hawaii-based 1st Battalion, 3rd Marines took it to Garmser, Afghanistan.

"It’s been almost a paradigm shift in understanding what suppression is," 1st Lt. Tom Rigby told Marine Corps Times. "It’s always been understood by the junior Marine that volume of fire and the sound of the machine gun equaled suppression."

The IAR also proved to be highly accurate at long distances, so Marines with the weapon could be used as ­designated marksmen.

"On single-shot, you can hit 800 yards no problem," Lance Cpl. Joshua Houck told Marine Corps Times. "I love that you can go from single shot to full auto with the flick of a switch."

These days, most rifle companies are issued 27 IARs and six SAWs, a Marine Corps official said.

The M27 that the Marine Corps currently uses for the IAR, is "hands down, the best automatic rifle in the world," said retired Army Maj. Gen. Robert Scales, author of the 2016 book "Scales on War: The Future of America’s Military at Risk."

"It outclasses the M4 in every single category," said Scales, who is not affiliated with Heckler & Koch.

"The key category is reliability — particularly in dusty, sandy, muddy terrain. The HK has a solid rod system, like the AK-47."

The M27, sold to civilians and overseas as the HK 416, uses a piston to control the function of the bolt, and that eliminates problems with gas-tube operating systems used in the M4 ­carbines and M16 rifles, according to the company’s website.

"If you have a solid rod, then the action can literally blow through things that would normally slow down a bolt action, because you’ve got more mass," Scales said in a March 27 interview.

"Whereas, the M4 has a floating bolt that’s not attached to the rod. The gas goes down a long, thin tube — and the gas itself blows against another tube on top of the bolt, which throws the bolt back instead of carrying the bolt back."

The HK 416’s floating barrel makes it much more accurate and stable than the M4, especially in automatic fire, he said. The rifle also gives troops between 100 and 150 extra meters of effective range than the M4. "It’s the only weapon better than the AK-74, according to people I’ve talked to," Scales said.

All of the technical innovations that make the M27 a modern and complex weapon also make it more expensive than the M4 — which has an operating system originally designed in 1955. And the M27 is also a very popular weapon, which drives up the price, Scales said.

Most weapons experts agree the M27 is a far superior rifle compared to the M4. But at up to $3,000 apiece, it costs a lot more compared to the M4, which typically costs less than $1,000.
Photo Credit: Heckler & Koch
Scales has been a longtime advocate for issuing infantry Marines and soldiers their own rifle because the infantry’s needs are different from those of other service members.

Most Marines who are not in the infantry mainly use their rifles as an "escape weapon," when they need to fight their way out of an ambush, push through kill zones or suppress a sniper, he said.

"Only the infantrymen use it as his primary weapon," Scales told Marine Corps Times. "Infantry should be ­treated different. You don’t give the same IT [information technology] kit to a private that you give to an information specialist."

Cost is not the primary concern as Neller considers whether to purchase more IARs, a Marine Corps official said. Marines are currently experimenting with how best to use the IAR in rifle squads. The results of that research could be used as a basis for Neller’s decision.

During the most recent Infantry ­Training Exercise, Marines experimented with different numbers of IARs within squads, said Maj. Anton T. Semelroth, a spokesman for Marine Corps Combat Development Command. The exercise was held during the summer at Camp Pendleton, Calif..

Although Marines and observers from the Marine Corps Warfighting Laboratory said that they believed the IAR was a more accurate weapon than the M4, the data on how often Marines hit their targets with both weapons was not recorded, Semelroth told the Marine Corps Times.

"During the exercise, the IAR gave the squads more firepower and flexibility and, with requisite training, appeared to increase the squad’s lethality," Semelroth said. "It enhanced the rifle squad’s ability to gain/re-gain fire superiority, particularly when ambushed. Also, the individual Marine generally had a higher degree of confidence in the weapon and the ease of cleaning the IAR provided efficiency gains in maintenance."

But the IAR is more expensive and heavier than the M4, Semelroth noted. Marines also tended to fire the IAR on full auto at targets that were outside the weapon’s effective range, but that issue can be fixed through training, he said.

The Marine Corps has a relatively small procurement budget and a long list of new equipment it needs, especially F-35s and CH-53Ks to replace the Corps’ older fighter aircraft and helicopters.

But making sure riflemen have the right weapon to do their job should be a top Marine Corps priority, said Rep. Duncan Hunter, a Marine veteran.

"The core concept of the Marine Corps, which was drilled into me and every other Marine since Day One of its inception is ‘every Marine a rifleman,’" said Hunter, R-Calif.

"When you look at that as the core competency — putting the young men on the ground with rifles in their hands to close with and destroy the enemy through fire and close combat — then the No. 1 thing that should matter for the Marine Corps is the lethality of their infantry."

Hunter recommended that the Marine Corps tell Defense Secretary Jim Mattis and President Trump that although it needs new aircraft, amphibious vehicles and other weapons systems, in order to remain the most lethal fighting force on the planet the Corps also needs money to purchase more IARs.

For nearly six years, lawmakers have been at war over taxes and spending, leading to cuts in defense spending that have lamed Marine aviation and caused the Marine Corps as a whole to contract. Still, Hunter said Congress would be receptive to providing the Corps with more money to purchase IARs, which do not require any research and development and can be fielded quickly.

"They aren’t asking for the new laser jammer that can kill sharks or try to make sharks into robots," Hunter said sarcastically. "What they are asking for is a new rifle that makes every Marine more lethal. That’s not pie in the sky stuff. That’s real stuff."

Unclassified footage of Iran's tactical ballistic missile strikes on Ain al-Asad air base Jan. 8, 2020. No one was killed in the attack, but 110 people were treated for traumatic brain injuries. (Central Command)
Close
Now Playing