Marine Corps officials have determined that two men pictured in the first flag raising on Iwo Jima were misidentified just months after they found mistakes in another famous photo from that day.

More than 70 years after the iconic moment during one of the deadliest battles in World War II, the Marines who raised the flag atop the Pacific island are getting their due.

Staff Sgt. Louis Lowery, a combat photographer assigned to the 5th Marine Division, captured the scene moments after the first flag was raised on Feb. 23, 1945. The official record has for seven decades identified Pfcs. Louis C. Charlo and James R. Michels as part of the six-man team that lifted the stars and stripes. 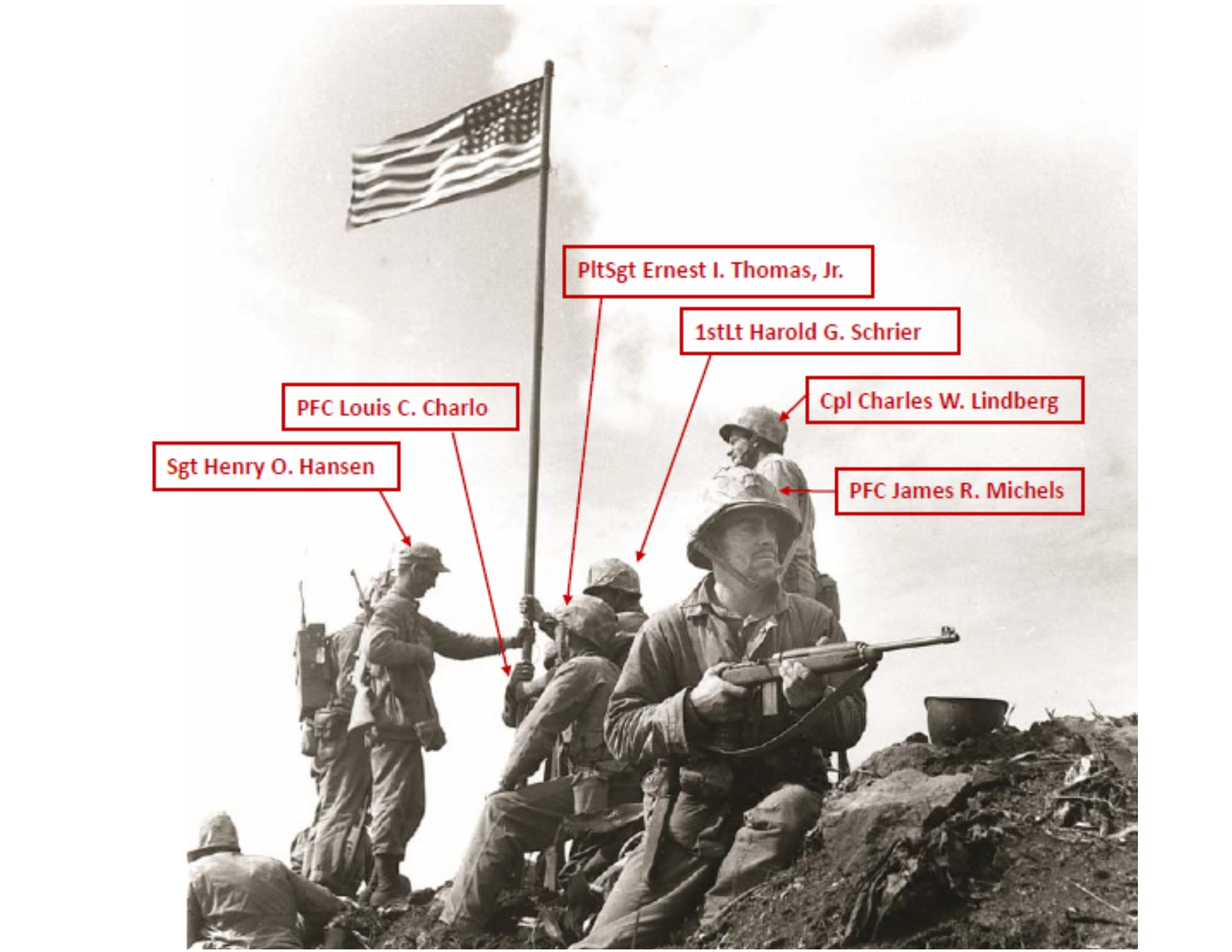 It was originally believed that Pfc. Louis Charlo, second from left, and Pfc. James Michels, forefront, were pictured in this photo of the original flag raising on Iwo Jima on Feb. 23, 1945. Marine officials have now determined that Pharmacist's Mate 2nd Class John Bradley and Pvt. Philip Ward were actually in the photo.
Photo Credit: Staff Sgt. Louis R. Lowery/Marine Corps

Charles Neimeyer, director of the Corps’ History Division and member of the review board, told Marine Corps Times that the service owes it to the men who fought on Iwo Jima to set the record straight.

"Most of them have passed on, but the legacy will live on," Neimeyer said. "There was nothing tougher, nor more horrific, than the fight for Iwo Jima."

It was long believed that Bradley was captured in Associated Press photographer Joe Rosenthal’s photo, the famous shot taken later that day and on which the Marine Corps Memorial is based. When researchers working on a Smithsonian Channel documentary noted the individual’s gear and uniform didn’t line up, Commandant Gen. Robert Neller formed a review panel to find the truth.

That nine-member board, led by retired Lt. Gen. Jan Huly, released its findings on that photo in June: The sixth man captured in the timeless photo was Pfc. Harold Schultz, not Bradley.

At Neller’s command, the board then turned its attention to photos of the first flag raising.

"Our history is important, and we owe it to our Marines and their families to ensure it is as accurate as possible," Neller said in a Wednesday press release. "After we reviewed the second flag raising and found inconsistencies, we wanted to take another look at the first flag raising to make sure we had it correct."

But Bradley's son, James, who wrote "Flags of Our Fathers," said he was made aware of the discrepancies more than a decade ago when Dustin Spence, a California-based historian, made a documentary about the events.

"I'm afraid there's no 'news' here for me," James Bradley said in an email. "This is 'news' for the USMC, but not for the Bradley family, nor the other families involved. ...I changed 'Flags of Our Fathers' a decade ago in light of Dustin's news."

The first flag was a symbol of hope for the 4th and 5th Marine Divisions, which fought tirelessly for every inch gained from the volcanic island’s black sands to Suribachi’s 554-foot peak. Raised on the fourth day of battle, the flag signaled to everyone on the island that a key enemy position had been silenced. Marines were taking the high ground, and there was now little doubt they would eventually take Iwo Jima from the 23,000 Japanese troops entrenched in an elaborate network of caves and tunnels.

The sight of that first flag drew a cheer that roared over the deafening sounds of war that had covered the tiny island. The cheer was so loud it captured the attention of Navy Secretary James Forrestal, who had just come ashore. He looked up to see the flag on a 20-foot water pipe, then turned to Lt. Gen. Holland "Howlin’ Mad" Smith and famously said "the raising of that flag on Suribachi means a Marine Corps for the next 500 years."

In its report, the Huly's review board noted that "[previous] attempts to accurately identify individuals involved in the first flag raising were complicated by the stress of combat, the lack of popular recognition as to the significance of the first flag raising, and the subsequent passage of time."

None of the flag raisers remain, so Huly’s team, which met from July 5-8, scoured through eye witness accounts, service records and hundreds of photos.

There were challenges, Neimeyer said. Lowery snapped a shot of the team preparing the flag, but had to reload his camera and didn’t capture the actual flag raising. Additionally, the first flag raising was not filmed like the second flag raising that Rosenthal photographed had been.

But Lowery took a shot of the flag pole being planted in the ground, and went on to take photos from every possible angle around the first flag. This proved critical, Neimeyer said. While some faces were obscured in key photos, which captured a number of Marines in the first flag’s vicinity. Some are on the radio while others were communicating with one another or providing over watch. The board was not content to know who was nearby — the team wanted to know who actually raised the flag.

The verdict: Charlo and Michels did not help raise the first flag, as previously believed. The board gave props to Charlo, however, noting that he was a member of the reconnaissance team that pioneered a path to the site, and later returned to the summit as security reinforcement prior to the raising of the second flag. Michels was thought to have helped raise the first flag due to his prominent positioning in Lowery’s photo. He can be seen providing security in the immediate foreground.

Though he now knows the six men who lifted the flag pole, Neimeyer said all 70,000 Marines on the island — where uncommon valor was a common virtue — had a hand in the effort.

"It is emblematic of the Marines, and their sheer grit and determination to overcome all odds," he said. "To physically demonstrate that by raising a flag on the most prominent terrain feature on that island was such a psychological and morale boost for everybody below who was literally hanging on by their fingernails, fighting the Japanese yard by yard. Every Marine who served on Iwo Jima can consider themselves, indirectly, to be a flag raiser."

"In my mind, all of the Marines involved in getting the flags flying above Mt. Suribachi could rightfully consider themselves ‘flag raisers,’" the commandant said. "Although Marines like Cpl. Raymond Jacobs, Pfc. Louis Charlo and Pfc. James Michels may not have been directly involved in the physical act of the first flag raising, their presence on Mt. Suribachi is irrefutable and their contributions were instrumental in raising the flags that inspired thousands of Marines to keep fighting."

None of the six-man team to raise that first flag are living. Thomas and Hansen never made it off the island. Cpl. Raymond Jacobs, the last surviving member, died in January 2008 at the age of 82.

The commandant’s office reached out to the next of kin for each Marine to let them know of the board’s findings.

"I regret that we didn’t get to it sooner, but I am very happy that we did such a thorough job," Neimeyer said. "We used hard physical evidence to back up our findings of fact, and we did the best job we could. I am very satisfied with the outcome of both boards."

Research needed for veterans with genital and reproductive wounds

A new survey seeks information from an estimated 1,500 Iraq and Afghanistan war veterans living with injuries to urinary, genital and reproductive areas.

“This ... is not only a war against Ukraine,” said Maj. Gen. Serhii Salkutsan, its NATO military liaison. “This is a war against the ... civilized world."

‘Deterrence the American way’: The new B-21 bomber debuts

The Air Force unveiled the Northrop Grumman-made B-21 Raider to the public Friday in a ceremony at Air Force Plant 42 in Palmdale, California.

US forces monitor Mideast skies at Qatar base amid World Cup

The creation of a task force focused on drones and other off-the-shelf battlefield technology at Al-Udeid Air Base shows the U.S. is in Qatar to stay.

US military halts patrols against Islamic State in Syria

Turkish threats of a ground invasion have stymied the missions with Kurdish forces.