The time and the place were prophetic. It was early 1945, and the place was Pearl Harbor, site of the surprise attack that plunged the United States into World War II.

The war’s final year was but a few days old, and the landing ship, tank LST-779 was in Pearl Harbor for extended training maneuvers in anticipation of landing on Iwo Jima. Lieutenant junior grade Alan Wood, of Sierra Madre, Calif., was serving as the LST’s communications officer at the time. “It was our first operation, and naturally we were a little excited,” he recalled. “We knew it would be pretty important because Iwo was so close to Japan.”

In this photo provided by the U.S. Marine Corps, three unidentified Marines of the 28th Regiment of the 5th Marine Division prepare to raise the smaller of two flags on Mount Suribachi, Iwo Jim, Feb. 23, 1945. The smaller flag was supplanted by a larger flag later that day. (Staff Sgt. Louis R. Lowery/Marine Corps via AP)

During the ship’s stay in Hawaii, Wood and several signalmen visited a Navy salvage depot. Wood, who was responsible for LST-779’s flags, recalled: “I was just rummaging around looking for anything that might be of use when I found this apparently brand-new flag in a duffel bag with some old signal flags. It was a large flag, and I was glad to find it because we were out of large flags. Little did I know how famous it would one day become.”

The Battle of Iwo Jima: A 36-day bloody slog on a sulfuric island

The Japanese defending Iwo Jima on D-day displayed superb tactical discipline. As Lieutenant Colonel Justus M. ‘Jumpin’ Joe’ Chambers led his 3rd Battalion, 25th Marines, across the first terrace on the right flank of the landing beaches, he encountered interlocking bands of automatic-weapons fire unlike anything he had faced in Tulagi or Saipan. ‘You could’ve held up a cigarette and lit it on the stuff going by,’ he recalled. ‘I knew immediately we were in for one hell of a time.’

Wood figured that the flag was probably from some decommissioned vessel, although he did not know where it actually came from and has since wondered about its origins. “We carried the flag on our long trek to Iwo,” he remembered, “and it flew several times from our gaff on Sundays—it being the one large flag we had.”

After stops at the islands of Eniwetok and Saipan for further battle orientation, LST-779 set out on the last leg to Iwo Jima. On board were a company of Marines and their 155mm howitzers, as well as reserves of ammunition and high-octane gasoline.

U.S. Marines of the 28th Regiment of the Fifth Division raise the American flag after capturing the 550-foot Mt. Suribachi on Iwo Jima, the largest Volcano Islands of Japan, on Feb. 23, 1945 during World War II. (Joe Rosenthal/AP)

In a letter to a friend (which on November 19, 1945, found its way into the Congressional Record), Wood described his first impressions of the battle for Iwo Jima. “On the 19th of February—a clear, cool, beautiful day—we rolled up to Iwo, which was a mass of smoke and dust,” he wrote. “The big ships of the Navy circled the island and were leisurely pumping a steady barrage of shells at it. Overhead our planes buzzed and roared as wave after wave dove at the beaches and Mount Suribachi. It didn’t seem possible there could be a living thing left on Iwo when the Marines got there. It looked like a pushover. But that afternoon as we cruised around, several thousand yards off the beach, we could tell by looking through binoculars that the Japs were doing a lot of fighting back.”

Feb. 17, 1945, had dawned clear and bright off Iwo Jima. At 10:45 that morning, Lieutenant (junior grade) Rufus G. Herring, aboard LCI(G)-449, peered through binoculars at the tiny island, still some distance away.

Wood and his shipmates could see burning tanks and landing craft. They were dismayed as they watched Japanese mortars and artillery brutally pummeling the U.S. Marines pinned down all along the beach. Then the call came for help—the howitzers were desperately needed. LST-779 headed for the beach. Through a mix-up, two other LSTs that were also supposed to land did not show up for two more days.

“The beach was a madhouse of men, supplies and noisy vehicles,” Wood wrote his friend. “Suribachi was a few thousand yards down the beach on our left, and the front line, marked by some entrenched tanks, was only a few hundred yards down the beach. Occasionally you could hear the spatter of small-arms fire, and all too often a big Jap mortar would explode with a shattering burst, and with terrible finality, right on the beach in the midst of all the men, supplies and machines.”

U.S. Marines of the 28th Regiment, fifth division, cheer and hold up their rifles after raising the American flag atop Mount Suribachi on Iwo Jima, a volcanic Japanese island, on Feb. 23, 1945 during World War II. (Joe Rosenthal/AP)

Unloading LST-779 took the afternoon and most of the night—a night that Wood declared he would never forget: “That pale moon, the eerie yellow star shells, the black grotesque outline of Suribachi, the occasional burst of a shell, sometimes close at hand, and the continual clank and groan of the tracked vehicles unloading our ship, and the wash of surf on the wreckage which littered the shore line. There was a feeling of death in the air that was overpowering—almost stimulating—which prevented any weary eyes from closing for any length of time.”

A pre-dawn Japanese mortar barrage threatened the LST, which was still loaded with large reserves of gasoline and ammunition. Mortar rounds fell dangerously close to the ship. “Shrapnel spraying against the steel plates sounded like someone was throwing handfuls of gravel at us,” Wood remembered. “How we missed being hit I don’t know. If we had, the result would have been disastrous.” The skipper of the LST wisely decided to pull out, since, for a time, the critical cargo had been unloaded. After two days spent a safe distance from the island, the ship was again beached, this time closer to Mount Suribachi.

Late in the morning on February 23, the Marines managed to secure Mount Suribachi and raised a small flag. But the little banner seemed insufficient to properly acknowledge the Americans’ momentous accomplishment. A battle-weary Marine appeared aboard LST-779, which was beached closest to the mountain in a long line of LSTs. As Wood recalled, the Marine asked to borrow a large flag. Wood asked him, “What for?” and the Marine responded, “Don’t worry. You won’t regret it.” Wood got approval from his skipper for the loan, which, of course, became a donation.

“I barely remember the Marine who came aboard to get the flag,” Wood said later, “and I don’t know if he was one of the group which raised the flag or not. He was dirty and looked tired, and had several days’ growth of beard on his face….Even though he couldn’t have been more than 18 or 19, he looked like an old man….I have looked carefully at the pictures of the men who raised the flag, but I recognize none of them.”

When the inspiring photograph of the flag-raising atop Iwo Jima’s barren Mount Suribachi was seen nationwide, war-weary Americans rededicated themselves to the cause for which the Marines and Navy had fought and for which nearly 6,000 of them had died on the island. But aside from the inspirational value of the American accomplishment on Iwo Jima, the victory there was extremely important to the war effort. In wresting the island from the Japanese, American forces had won an air base that would save the lives of hundreds of Allied airmen returning from raids on Japan with crippled aircraft or near-empty fuel tanks.

Joe Rosenthal’s dramatic photo—which later won a Pulitzer Prize—spoke volumes of hope and determination to Americans yearning for peace. Today, more than half a century after the flag was photographed on Iwo Jima, most Americans have either seen the famous Rosenthal photo or visited the Iwo Jima Memorial modeled after it in Washington, D.C.

In the days that followed the flag-raising on Mount Suribachi in 1945, Wood wrote his mother about the part he had played in providing the now famous flag. Mrs. Wood, in turn, wrote to the War Department, explaining her son’s involvement. Alan Wood later heard from Brig. Gen. Robert L. Denig, director of the U.S. Marine Corps Division of Public Information in Washington, who requested details.

Wood once again told his story, heaping praise on the Marine combat troops. He wrote on July 7, 1945: “Because we were the first LST to beach at Iwo, and because we experienced a little of the deadliness of the Jap fire there, the crew of the 779 is, naturally, proud that our flag was flown from Suribachi. However, speaking for myself—and yet I am sure there are many others aboard who feel the same—the part we played in the invasion of Iwo Jima was pretty small compared to the willing and simple heroism with which the Marines did their bloody job. The fact that there were men among us who were able to face a situation like Iwo where human life is so cheap, is something to make humble those of us who were so very fortunate not to be called upon to endure any such hell.” 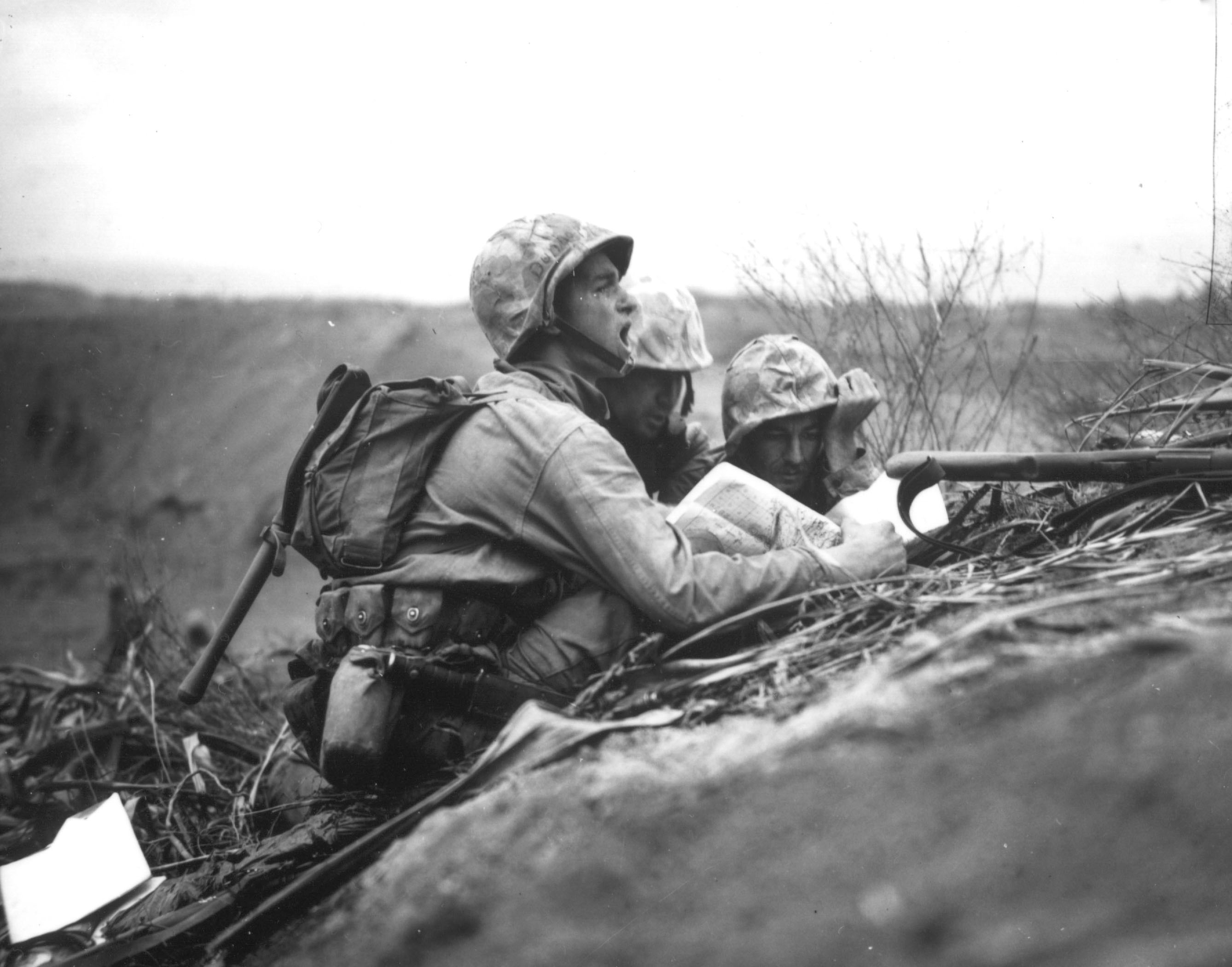 After it flew on Iwo Jima, the ceremonial flag was preserved by the Marines. In a letter to Wood, Denig told him that the flag had been taken on tour to promote the sale of war bonds. Today it is displayed in the U.S. Marine Corps Museum in Quantico, Va. The flag Wood rescued from dusty obscurity has become perhaps the most celebrated and cherished Stars and Stripes since Francis Scott Key’s immortal “Star-Spangled Banner.”

In the years that followed the war, Wood found himself involved in another great national quest, one some have called “the moral equivalent of war”—the space program. In 1950, he joined the Jet Propulsion Laboratory (JPL) in Pasadena as a graphic artist. At the time, the JPL was heavily involved in guided missile research and rocketry. By the late 1950s, however, the JPL—the high-technology research and development arm of California State Polytechnic University and the National Aeronautics and Space Administration—found itself headed for space. In response to the Soviets’ launching of the satellite Sputnik, the United States—with the help of the JPL—launched Explorer I.

At the JPL, Al Wood drifted into the Public Affairs Division and began developing daily status reports for nearly all the organization’s major space shots. He made it his business to understand and explain the nuts and bolts of highly complex engineering and scientific concepts in order to provide knowledgeable and informative updates.

The JPL’s Ranger spacecraft series went to Mars, and Surveyor landers helped pave the way for the Apollo 11 moon landing. On numerous unmanned space missions, through his telephone status reports, Wood became known as “The voice of…” whatever the JPL was involved in at the time. The grand tour of the twin Voyager spacecraft to the outer planets and later the Galileo spacecraft’s mission to Jupiter were among the complex space missions interpreted for the media and the public by the former naval officer who had helped to create a symbolic moment during America’s struggle for peace.

This article was written by R.C. House and originally published in the January 2000 issue of World War II Magazine.

Interviews: National Guardsmen in US capital for inauguration

National Guard troops in Washington in the wake of a deadly attack on the U.S. Capitol building on Jan. 6 talk about the experience of being mobilized to the city in the midst of potential unrest around the inauguration of President-elect Joe Biden.
Close
Now Playing