It may be close to impossible to write a playlist of military anthems ­without including some by country music ­superstar Toby Keith.

Over the years his hits like “American Soldier,” “Courtesy of the Red White and Blue (The Angry American)” and “Made in America” have roused the patriotic fervor of troops and civilians alike.

With a new album just released Sept. 8, the award-winning singer and songwriter once again includes melodies to appeal to the spirits of service members.

“The Bus Songs” is comprised of tunes that initially were close to “too bizarre,” “too dirty,” or “too politically incorrect,” (think along the lines of his ode to the plastic party glass in “Red Solo Cup”) but were recorded after they became big side hits on the road.

A few of them Keith played for troops on his 11 years of USO tours, and only now is including them all on one album.

Check out “Call a Marine” (where he croons “Call a Marine/ Instead of 911/ They’re built to improvise, adapt and overcome”) and “Ballad of Balad” (which he wrote after a trip to Balad Air Base, north of Baghdad).

Keith recently took a quick break on his “Interstates & Tailgates” tour to chat with Military Times about the album, his support for the troops, and about his dad’s Army service, which came at a cost.

Some highlights, edited for clarity and brevity.

Get your fill of tactical coolness with guns, gear, bullets and moto content each week

Q. What are you most excited about for this new album?

Well, we have had over 20-some years of writing. We would sit on the bus and we would write songs, and once in a while somebody would say something crazy. We’d grab a guitar and write that craziness down, and sometimes they’d bloom into little songs.

Most of these can’t be recorded. They’re not commercial. They’re not going to make it on the radio. They’re too bizarre. They’re too dirty. They’re too politically incorrect. But a few of them that we could record busted out and became big songs, like “Red Solo Cup,” “I’ll Never Smoke Weed with Willie Again,” and “Get Out of My Car.”

The fans started singing them at our shows, and I had four or five that I just sang on my USO tours. I wrote one in Balad called the “Ballad of Balad.”

I wrote “Call a Marine” because I would end up occasionally just on some small bases that only had Marines on it. I wrote “American Soldier” — and I ­consider everybody soldiers in God’s army — but everybody has their own branch. Most of my stuff was soldier-driven since my dad was a soldier — lost his eye over there. I thought, “When I land on these Marine bases it would be nice to have a Marine song.” So I wrote “Call a Marine.”

We’ve just had fun with them. Each song came out one at a time, and my manager said, “Hey, why don’t you call all those up on one album called ‘Bus Songs?’”

Q. What has the response been to “Call a Marine?”

Oh, it’s great. It’s a funny song. It’s pretty much the “Ballad of Balad;” it’s funny. There’s a song we did called “Runnin’ Block” — you need a wingman, your best friend’s got a date and he wants you to go on a blind date with him to run block on his girlfriend for him. “Call a Marine” is the same thing, but it’s ­written for the Marines. It’s basically about, if you’re in a bar and you’re in trouble, call a Marine. But also if you need somebody to run block for you, call a Marine — he’ll throw himself on a grenade if he has to for you. It’s just some of that fun, boy meets girl, fist fight, drinking, ­gung-ho stuff. 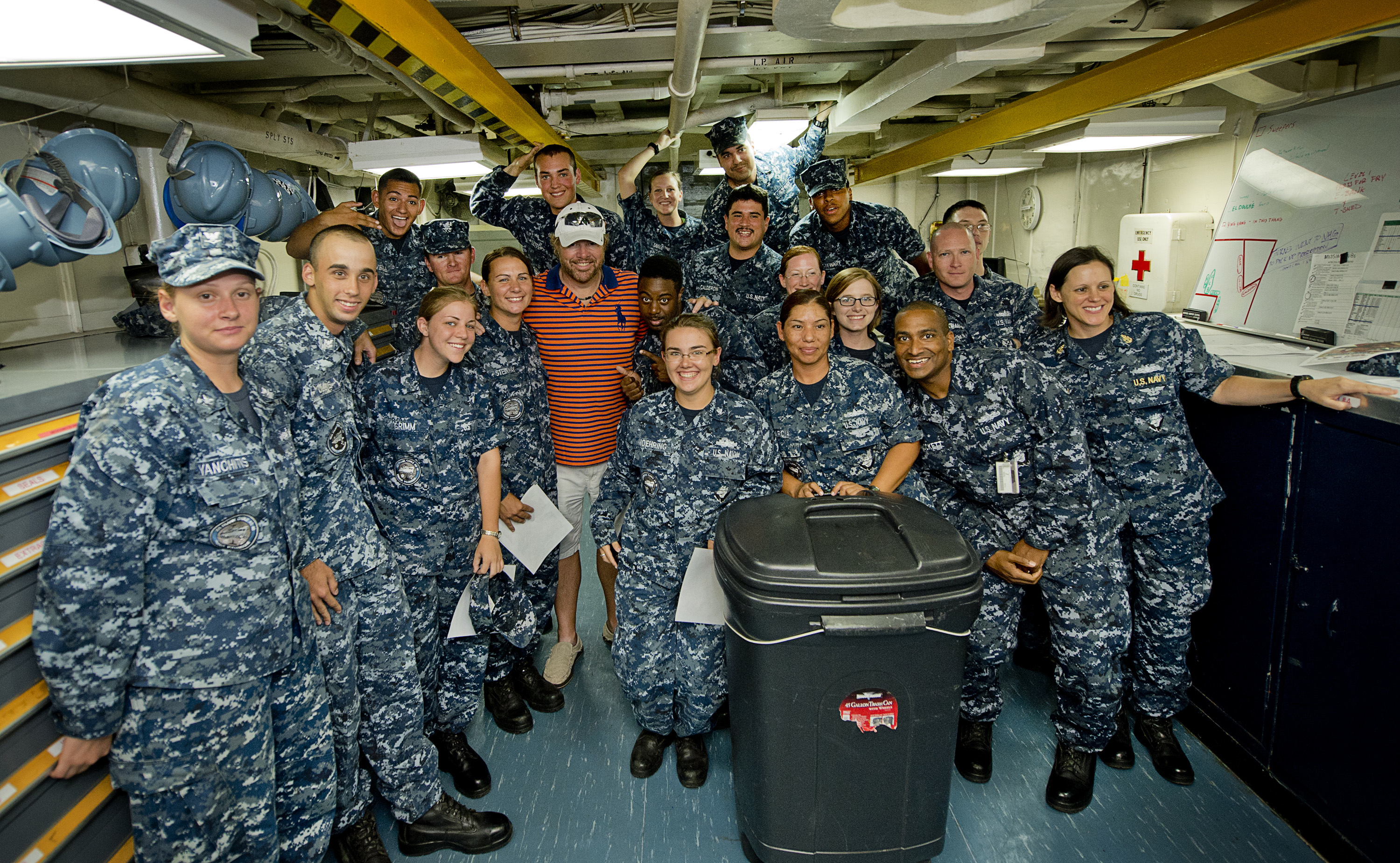 Toby Keith poses for a group photo with troops stationed in Guam in 2013. (Dave Gatley/USO)
2 of 8 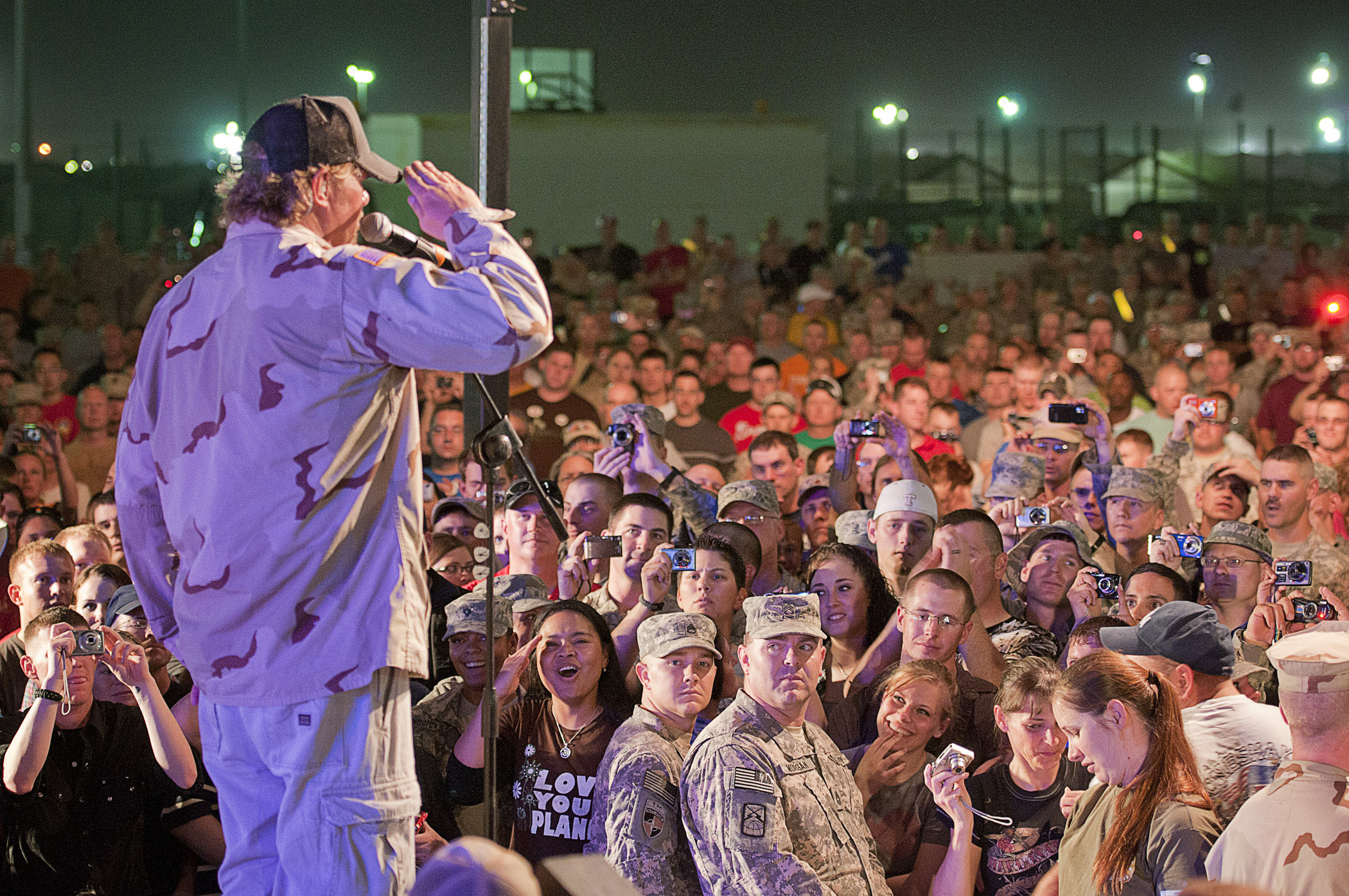 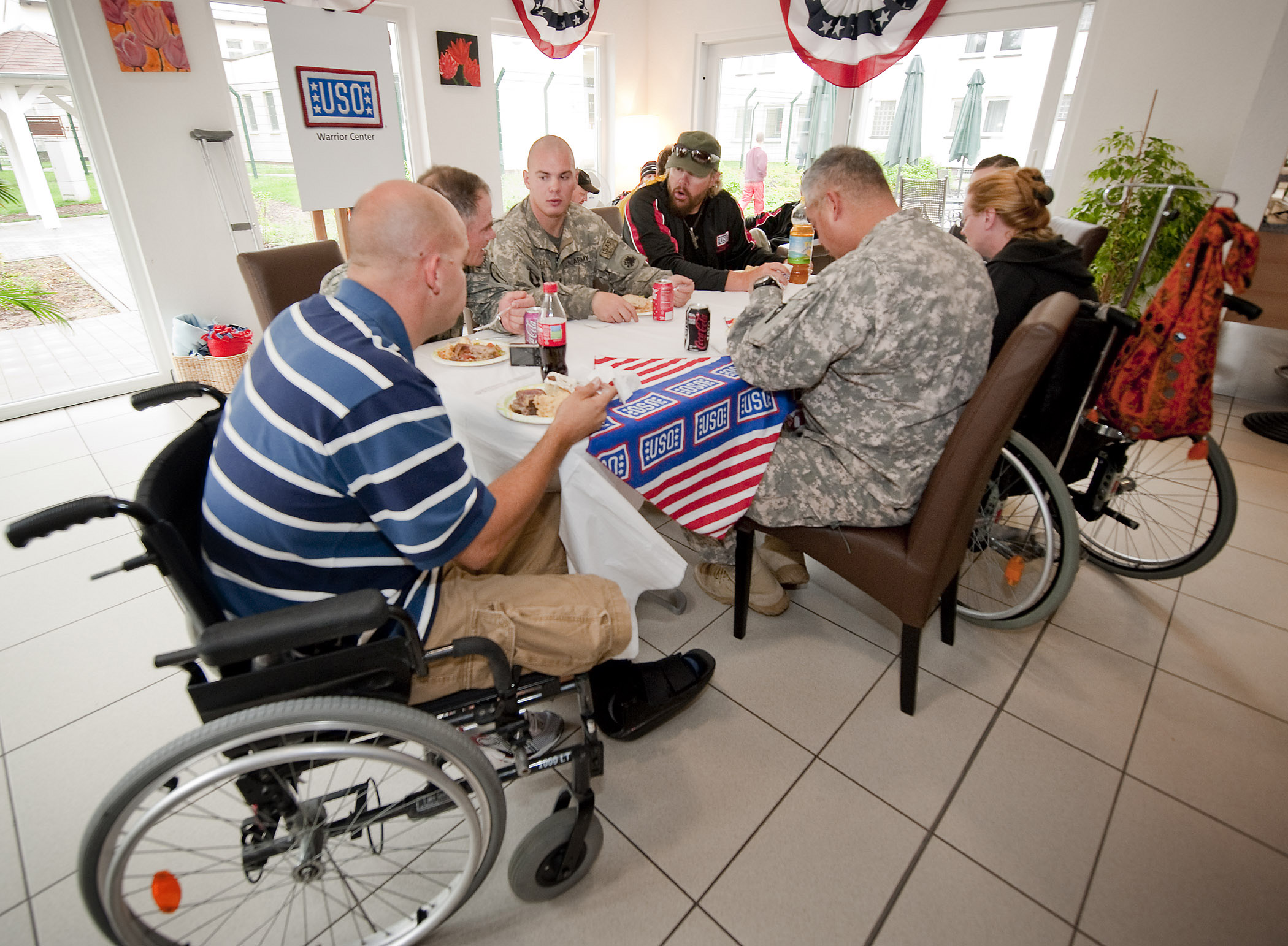 Toby Keith visits the with wounded warriors at the USO's Wounded Warrior Center in Landsthul, Germany, May 2010. Traveling on his eighth USO tour Keith travelled to four countries in 14 days, visiting military families in Korea and Germany as well as troops serving on the front lines in the Persian Gulf. (Dave Gatley/USO)
4 of 8 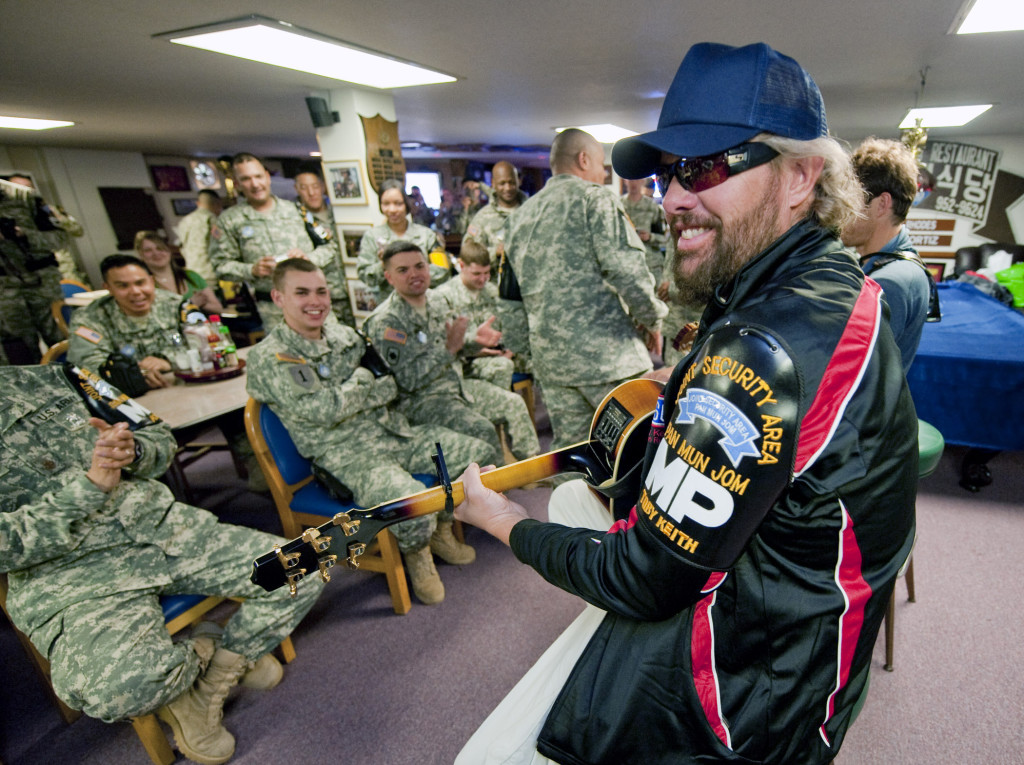 Toby Keith and singer/songwriter Scotty Emerick (behind Toby) put on an impromptu acoustic performance for troops in Korea, April 29, 2010. (Dave Gatley/USO)
5 of 8 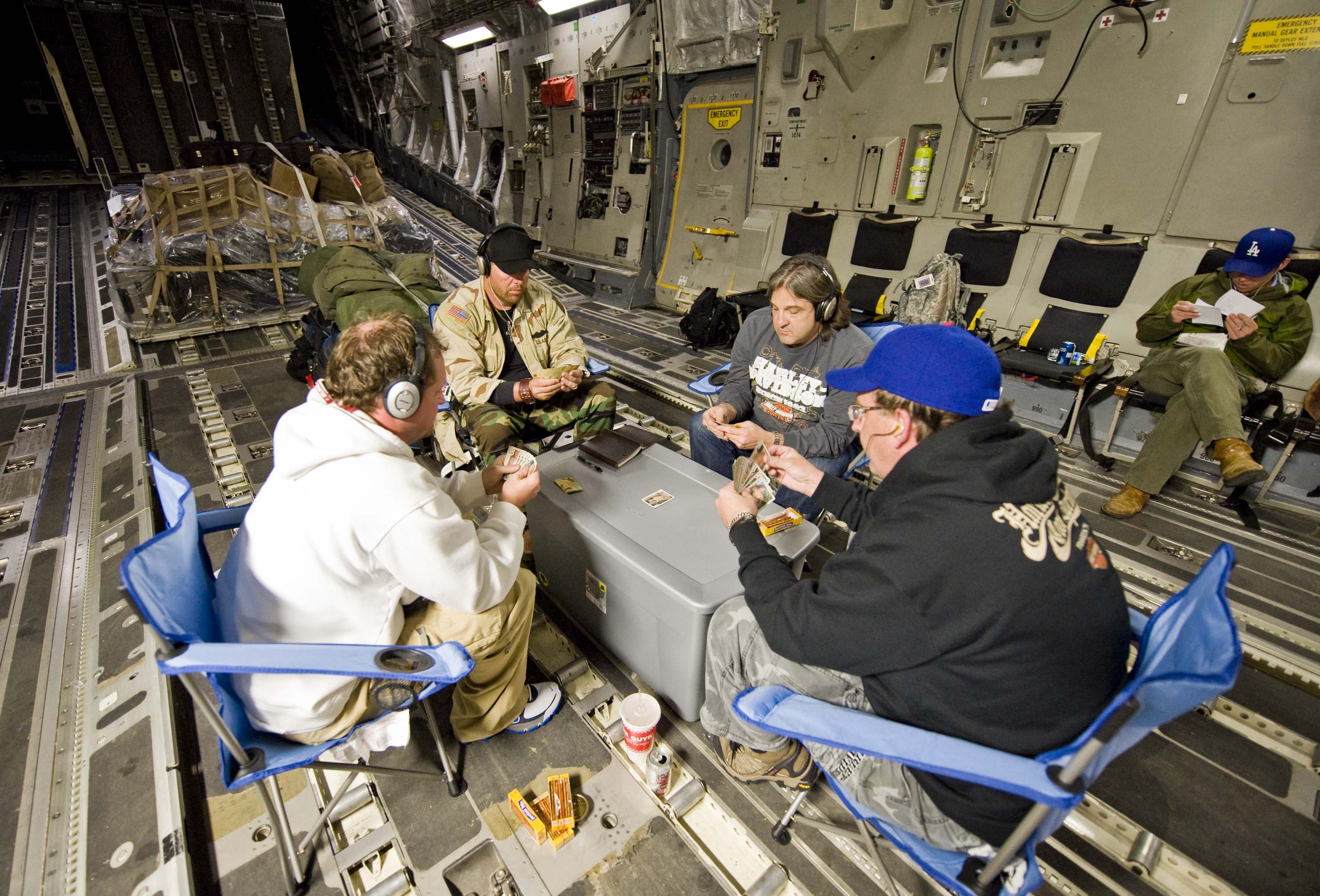 Toby Keith in Afghanistan in 2009 putting on shows at Forward Operating Bases, most of which haven't had any outside entertainment in six months. The core group with Toby Keith (C-black hat) play their traditional game of Spades off folding chairs and a storage box, at the rear of the C-17 on the flight to Germany for refueling and maintenance. (L-R) Brian O'Connell, Toby, Curt Motley, and Mitch DeNeui (back to camera). (Dave Gatley/USO)
6 of 8 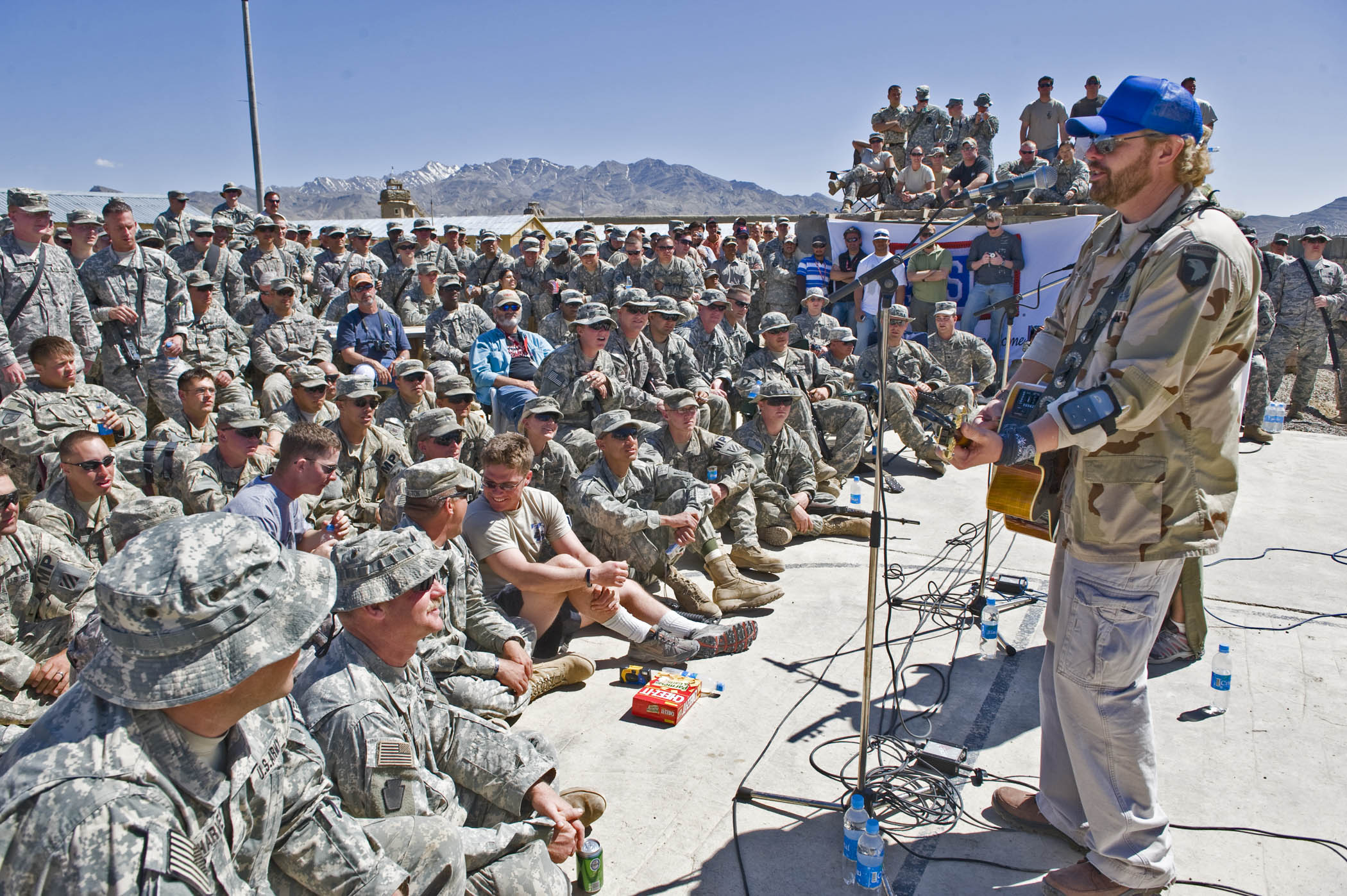 Toby Keith in Afghanistan putting on shows at Forward Operating Bases in 2008. Here at FOB Gardez, where the soldiers were able to get up really close in this acoustics show. (Dave Gatley/USO)
7 of 8 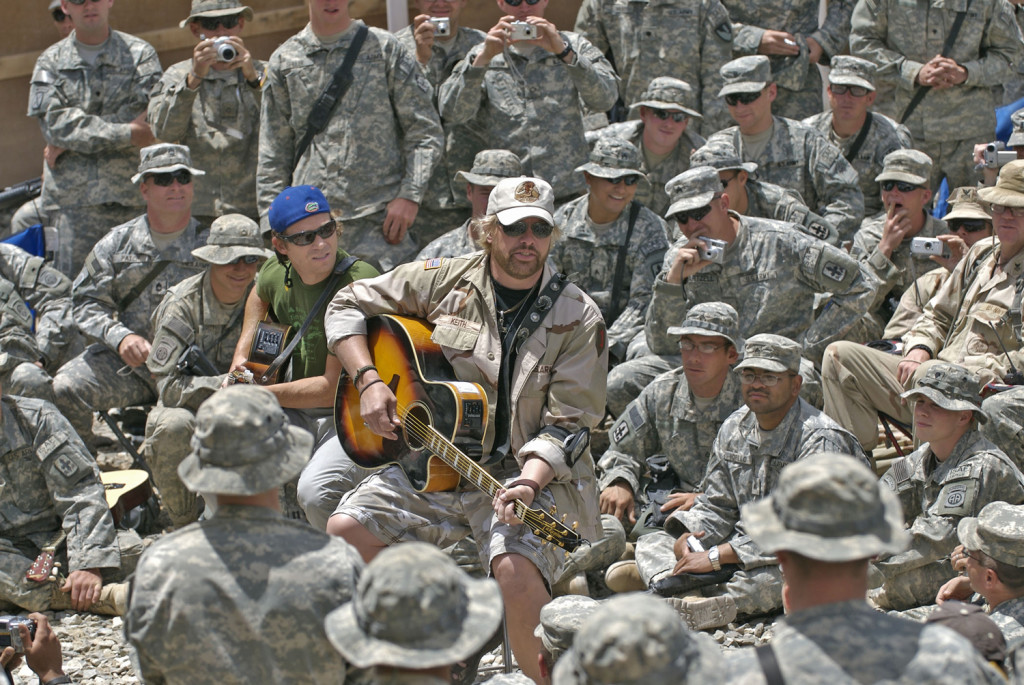 Music superstar Toby Keith on his fifth USO tour to the Persian Gulf and Germany to entertain the troops in 2007. (Dave Gatley/USO)
8 of 8 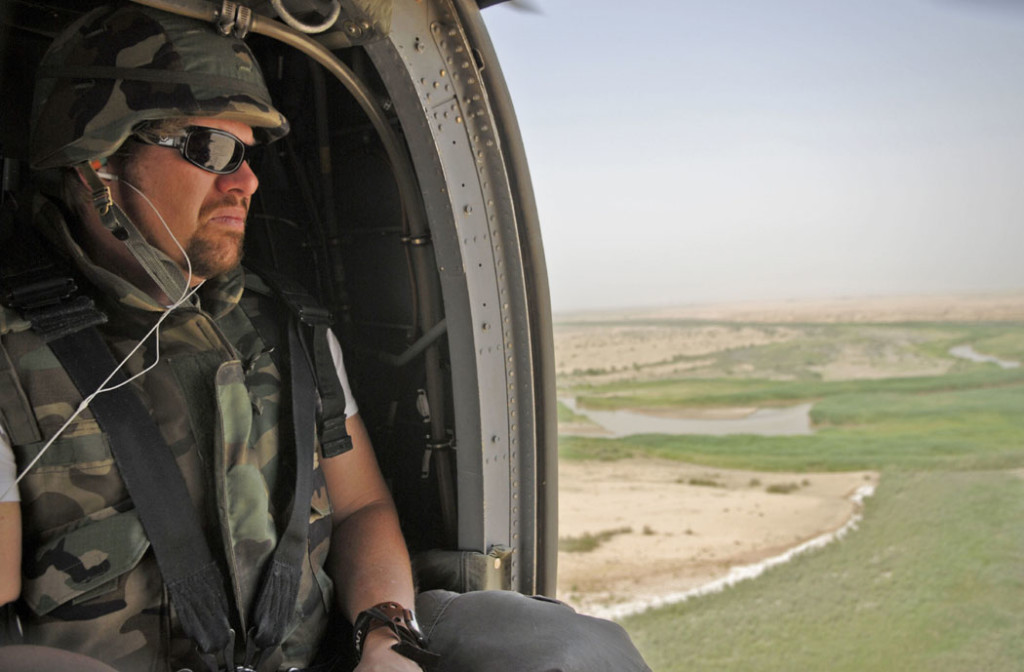 Toby Keith on his fourth USO tour to perform for troops in Germany and Northern Iraq in 2006. Traveling by Black Hawk helicopter (UH-60), Toby Keith visits troops at FOBs in Northern Iraq as part of his annual USO Tour. (Dave Gatley/USO)

Q. You’ve said that it’s crucial to ­support our service members no ­matter the politics. Why is ­supporting our troops so important to you?

My dad would never let any solicitors in our house. He had a poor-boy flag on his farm: It was just a piece of pipe with a flag on it; you couldn’t raise or lower it. You had to get a forklift to go up and change the flag or you had to take the pole down — it didn’t have a rope on it. He’d fly that thing 365.

If the solicitors came by, knocked on his door, he wouldn’t let them in. But as soon as the veterans’ organizations would come by he’d bring them in and give them coffee and they’d talk about his disability and his military discipline. It was during the Korean War that he lost his eye. He came back and instilled in his children that the vets are very important to us and you had to respect them.

The year I agreed to do it he got killed in a car wreck. I went for him.

When I got over there, I saw the void. It wasn’t like when Bob Hope was doing it and everybody was cool with it. Now, there’s three reasons: They’re either too lazy, too afraid, or too politically connected. My agent became a USO board member the next year, and we started working our butts off to get people over there. We realized how difficult it was.

Q. You’ve had some poignant ­moments with troops. You even helped re-enlist a sailor a few years ago. What are some special memories you have had with service members?

There’s a million of them, and I’ve done a lot of re-enlistments.

Probably the one that affected me the most: I was leaving Baghdad one time and some senators seized our aircraft. We needed to go to Kuwait and onto Afghanistan. They brought a C-130 — we were supposed to be on the tarmac at 8 o’clock. And we got down there and about six senators we’re on a ­fact-finding mission, whatever that is, and they seized our aircraft. We had to wait on the next one at 2:30 p.m.

They put us all in formation and made us stand out behind, and they loaded a flag-draped coffin: [Army] 1st Lt. Erik McCrae. They strapped him down and we sat in those little side chairs and rode all the way to Kuwait with him. It was surreal and somber; touching as it was, it was truly an honor.

I’ve met his family several times; they live in Oregon, and every time I’m up there I see them. His dad served the country proudly, and I’m very close to their family. They said it was a big honor that I flew out with their son, and I said it was a great big honor to get to.

It was just one of those things that lined up. But there have been so many I could write 10 books on what I got to do over there.

Q. You’ve been at this a long time, and you have singles that are older than a lot of junior enlisted. Have you seen a generational shift at all?

Oh yeah — and I’ve made so many friends over there. When you’re in Fallujah for two days and you’re going to get up and run around for three or four hours, eat breakfast, then you’re going to jump on a chopper and run downrange for four or five hours, come back, spend the night there, hang out, smoke cigars, eat dinner with these guys and get up and go back and do it again tomorrow before the big show there ... you get to know these guys, and they serve their duty and they come home. And then you show up in their town, they’ve got all their buddies with them. And that happens everywhere I go.

But yeah, I can see how the way the rules of engagement are and the way our political leaders have responded to these situations; I can believe it. But if they just handed it over to the military, I don’t think we would have been there very long.

Today when I landed — I’m on an ­island right now in Ohio called ­Put-in-Bay — we landed on the mainland and we’re going to fly a helicopter over here and there was a guy waiting on me as soon as I stepped off that said, “It’s been 11 years, I want to shake your hand again.” He pulls a picture out, and there we were in Iraq.

Everywhere you go you’ve affected and been affected by so many relationships that you can’t ever lose those friendships.

Q. You were in Iraq and Afghanistan a dozen years ago. Did you ever think we’d still have troops there?

Well, if it was left up to the military it would have been over with.

Q. Any final words for our troops?

Thanks for your service. My fans, my family, my band, and my crew all thank you for your service and your sacrifice, and we understand most of what you go through you — because I’ve seen it firsthand. Come home safe, Godspeed, and we’ll have a cold one when you get here.

A new study shows greater promise for the use of specialized field dressings to help treat blast and burn injuries in the field. The draft gets a constitutional challenge, and more troops get approved to help with COVID-19 vaccinations. Also, the latest on the status of the JEDI contract and the latest headlines from the defense industry. That and more on Defense News Weekly for February 20, 2021.
Close
Now Playing

The size of the surface fleet and a groundbreaking pilot - Defense News Weekly Full Episode, 2.13.21