After activating 12,000 Texas National Guard members earlier this week, Gov. Greg Abbott has activated an additional 2,000 troops to help with hurricane relief efforts in the southeastern part of the state.

He also announced that he is working to get another 10,000 troops from Guard units in other states.

Abbott announced on Wednesday during a news conference that 14,000 Texas National Guardsmen are responding to the aftermath of Harvey, which made landfall on Friday as a Category 4 hurricane and is now a tropical storm.

Continued rainfall caused historic flooding in southeast Texas, and a million people have been displaced from their homes.

Guard members from other states have already been assisting in relief efforts in Texas, but Abbot is requesting another 10,000 troops from National Guard units in other states. The additional 2,000 Texas Guard members include soldiers who have recently returned from deployment.

“We are also getting immediately 200 boats and 200 vehicles from the Department of Defense to be assigned where needed,” Abbott said during the news conference.

Approximately 400 soldiers will travel to the Houston area to assist with hurricane relief efforts.

Before the governor’s announcement, the National Guard Bureau told Army Times that it helped facilitate requests that saw assets arrive in Texas from 15 different states as of Wednesday morning.

“Most of these requests, at this point, were for aviation assets [C-130s and helicopters] and boats,” said Sgt. 1st Class Mike Houk, a spokesman with the Bureau.

Once more needs are identified, he said, more assets will be requested. For example, if more swift boats are needed, National Guard units with those boats can be deployed to Texas. 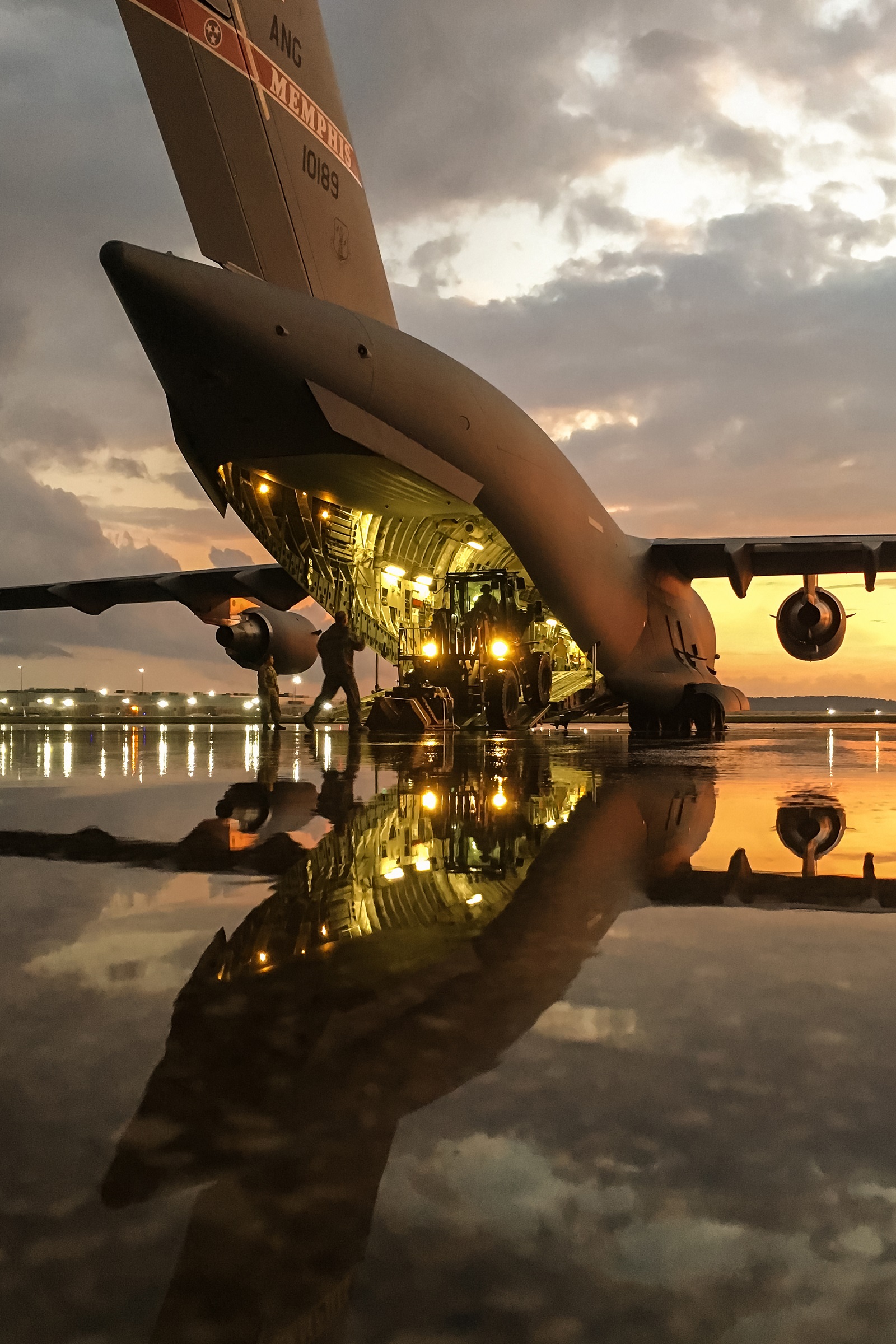 An Air Force loadmaster with the 164th Airlift Wing, Tennessee Air National Guard, directs an all-terrain forklift onto a C-17 to support rescue operations in Texas following Hurricane Harvey, at the Kentucky Air National Guard Base in Louisville, Kentucky, Aug. 29, 2017. More than 30 Kentucky Air Guardsmen and 90 tons of equipment were airlifted from Louisville to Houston to stand up an aeromedical evacuation and air cargo hub. (Lt. Col. Dale Greer/National Guard)
2 of 7 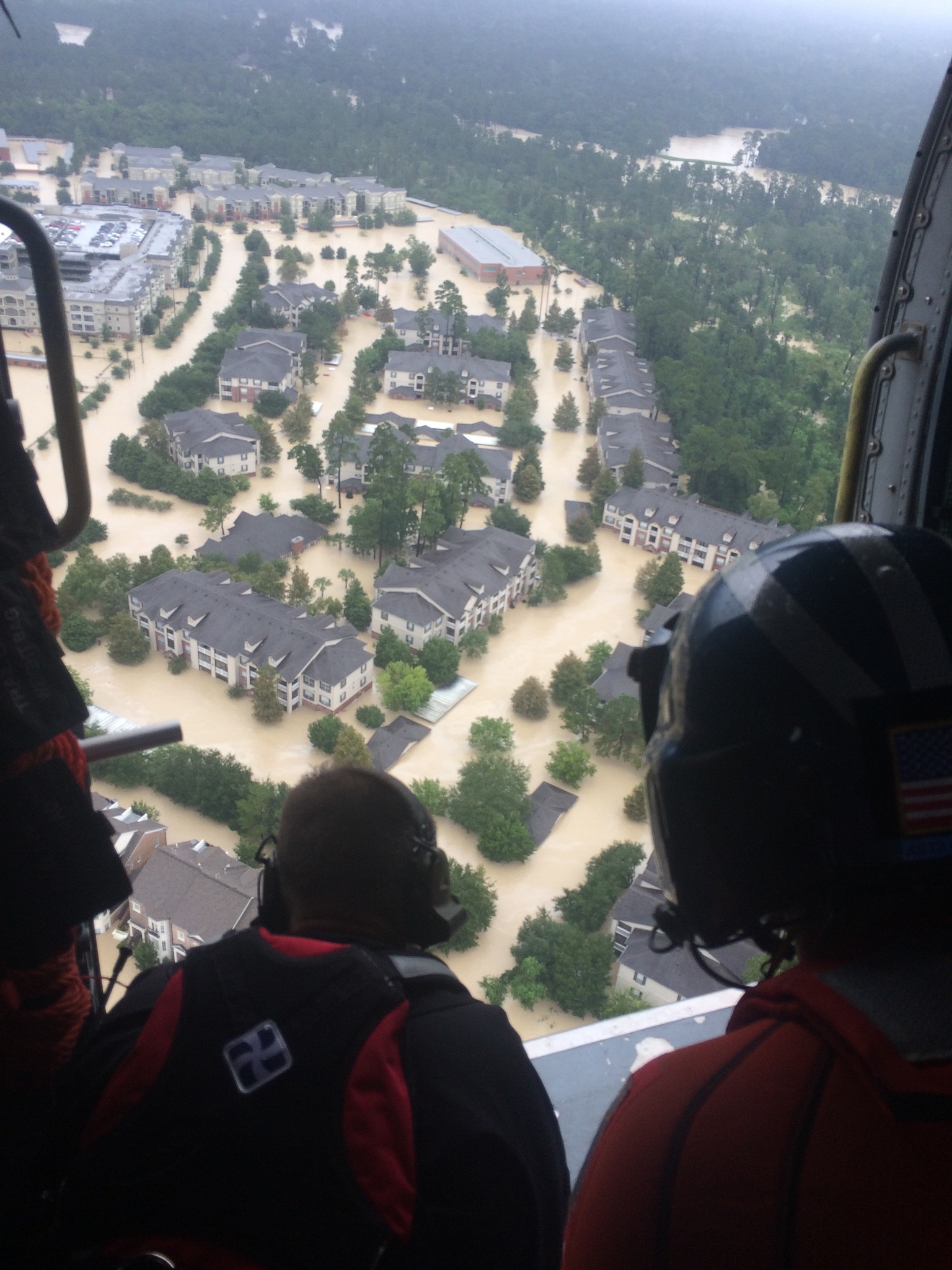 Members of the Kentucky Air National Guard’s 123rd Special Tactics Squadron fly on board a U.S. Coast Guard helicopter near Houston, Texas, Aug. 29, 2017. The airmen are patrolling the area looking for people who are trapped in their homes or on rooftops. (Air National Guard photo)
3 of 7 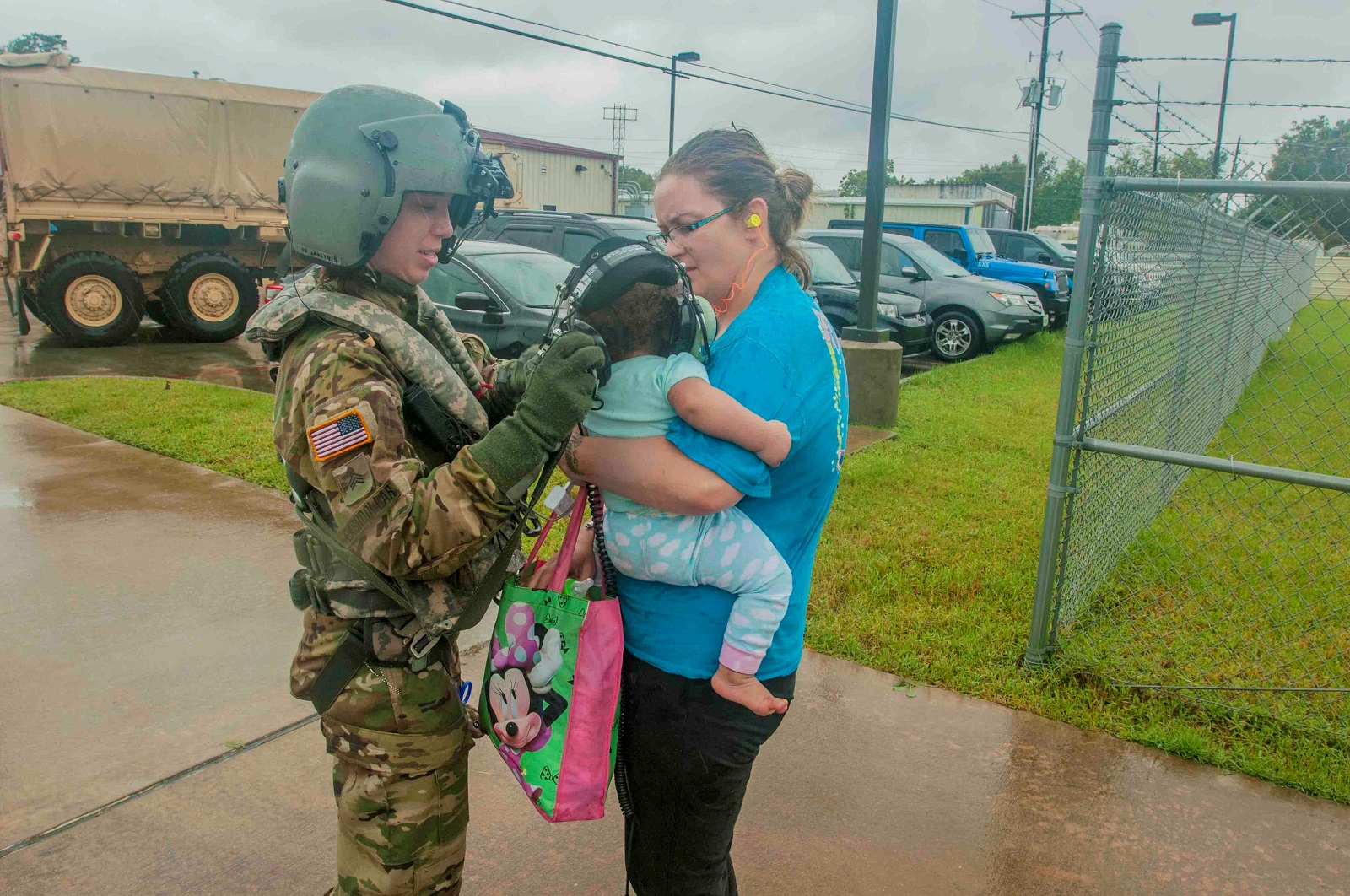 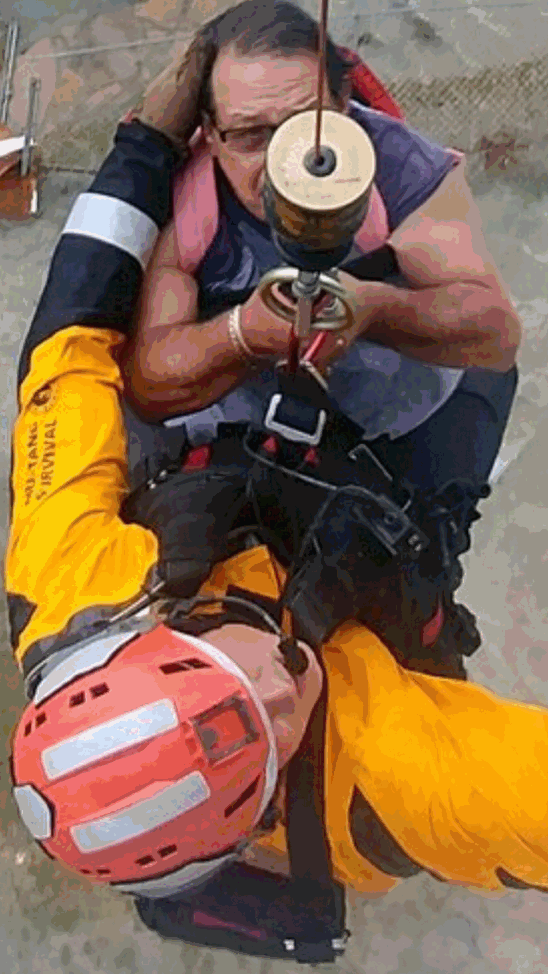 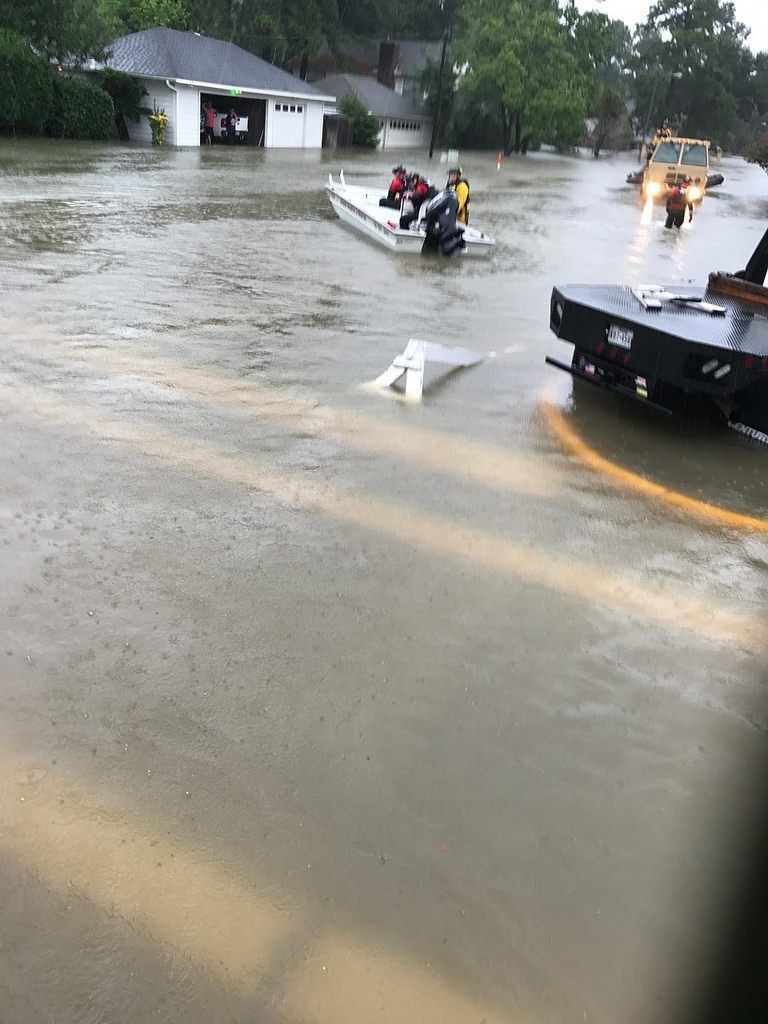 Soldiers with the Texas Army National Guard support relief efforts to residents of Cyprus Creek as they fight back from the effects of Hurricane Harvey. (Capt. Martha Nigrelle/Army)
6 of 7 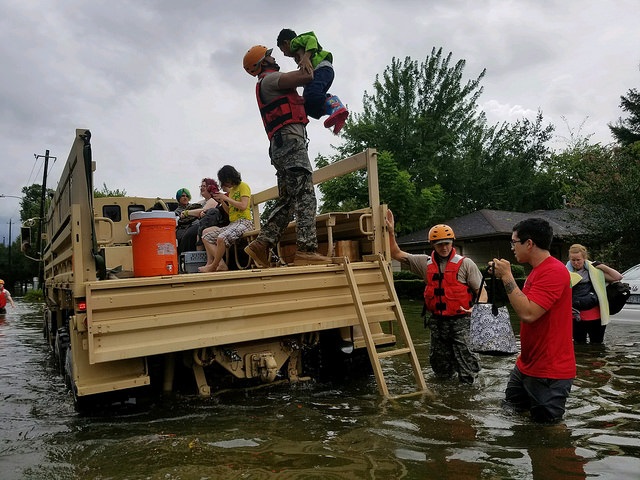 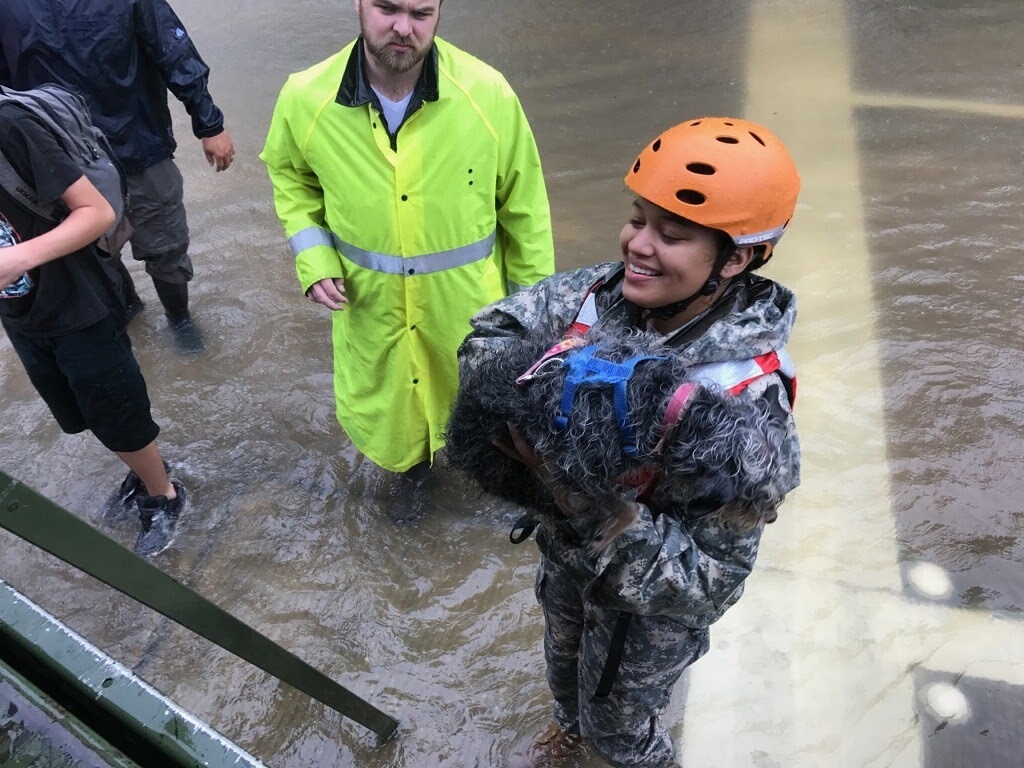 Soldiers with the Texas Army National Guard support relief efforts to residents of Cyprus Creek as they fight back from the effects of Hurricane Harvey. (Capt. Martha Nigrelle/Army)

Members from the Army and Air National Guard and the Army Reserve have already been deployed to assist in relief efforts and rescuing stranded residents amid historic rainfall and flooding in Texas.

The Virginia National Guard announced it’s preparing to send approximately 40 soldiers and seven helicopters to Texas on Thursday morning, according to a news release.

According to the Defense Department, there are approximately 400 Air National Guard members in Texas, including troops from:

The soldiers rescued a mother and child from rising floodwater, according to an Army Reserve Command news release.

They evacuated the residents via helicopter and took them to safety, the release said.

Army Reserve soldiers from Texas and Colorado have assisted in rescuing more than 3,000 people in the storm’s aftermath using aviation and wheeled vehicles with water fording capabilities, according to a news release.

According to the National Guard, members have helped rescue thousands of displaced residents and more than 300 pets.

Charlsy is a Reporter and Engagement Manager for Military Times. Email her at cpanzino@militarytimes.com.

New data suggests military suicide numbers have taken alarming jump in the time of COVID-19. The Marines look at closing Parris Island as they move toward integrated training platoons. Military Times tags along in one of the last two B-29s still flying, and a story of Vietnam heroism that may be worthy of a Medal of Honor. All that and more on The Briefing for 10.1.20.
Close
Now Playing

A bigger Navy, some stolen valor and the Marines recruit Gen Z ― The Briefing, 9.24.20