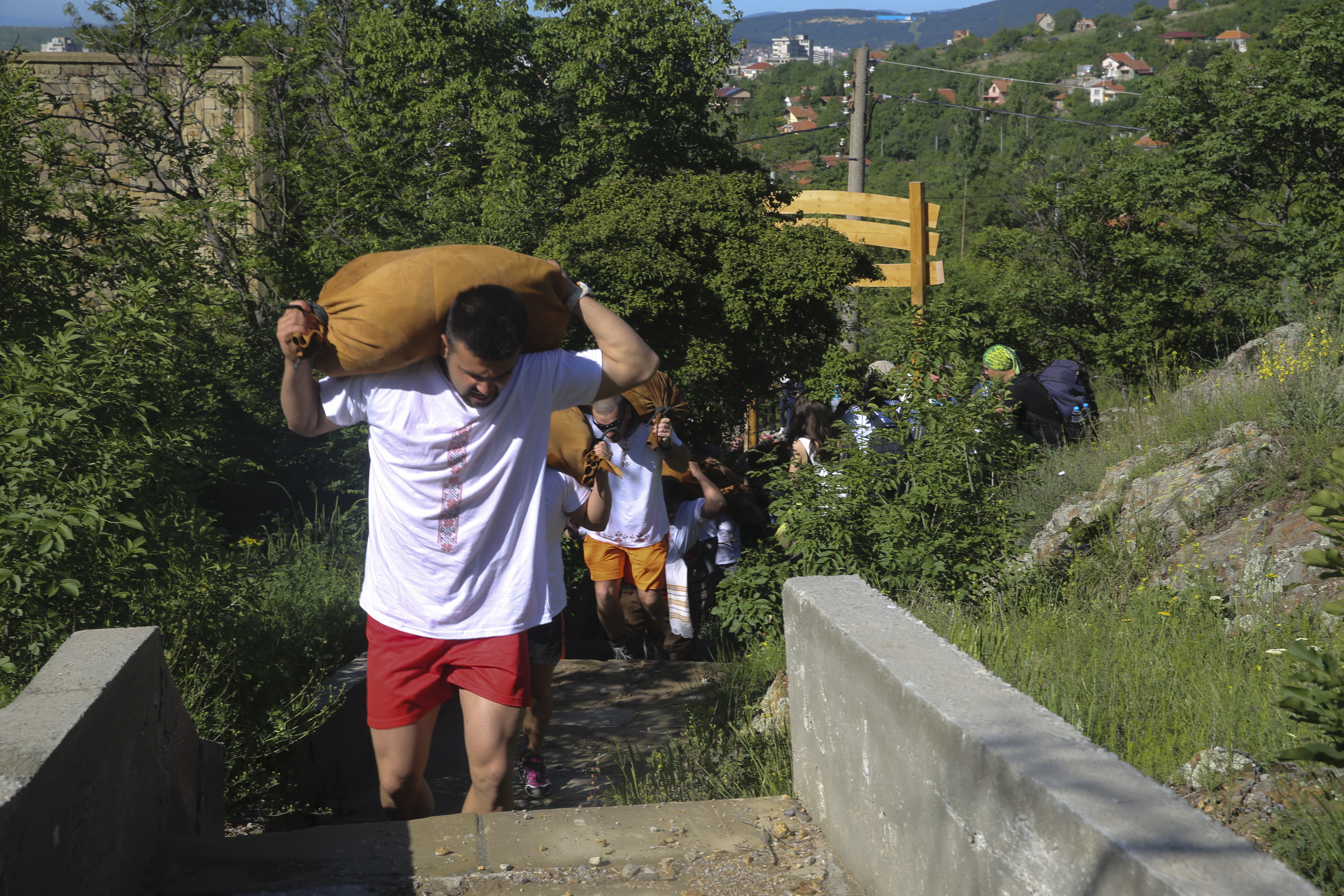 Hump 95 pounds of wine up a steep mountain, take a 5-mile run, then spend the day seeing who is best at throwing knives and boulders — that's all in a day’s training for Marines with the Bulgaria-based Combined Arms Company Black Sea Rotational Force.

The unique events were part of the "Haiduk gathering," a local festival held last week May 15 in Sliven, Bulgaria, to honor Hadzi Dimitar. The famous 28-year-old Bulgarian revolutionary gave his life on July 18, 1868, near the Buzludja summit in central Bulgaria in the Shipchenska mountain while fighting against the Ottomans.

The freedom fighter, whose real name was Dimitar Nikolov Asenov, climbed the snowy mountain so that his detachment could have wine to drink on the eve of battle.

Eighteen U.S. service members, to include 16 members of the Marines' BSRF’s Combined Arms Company, competed alongside Bulgarians in various parts of the historical reenactment. This is the first year BSRF Marines have participated in joined the competitive festival.

"All the hikes I have done in the Marine Corps helped me out mentally; I knew I had to push through and kept telling myself Marines never quit," said Sgt. Brandon Derenoff, an artillery radio chief who was the only participant to ascend the mountain without assistance while carrying the 95-pound bag of "wine." and with a full bag.

Sgt. Joshua Ramos wasn't as fortunate — his wine bag fell off and popped. Some participants were beginning to struggle and started passing off their bags, so the rifleman grabbed one and kept moving forward.

The This BSRF deployment is the first to include the Combined Arms Company is deployed with the Marine Corps' Romania-based Black Sea Rotational Force. , which is based out of Novo Selo Training Area. The 150 Marines assigned to the unit are equipped with four Abrams main battle tanks, six light armored vehicles and three howitzers.

Marines with the Bulgaria-based Combined Arms Company start the running competition to Dragiev's spring during a historic festival in Sliven, Bulgaria, on May 15. Competitors who wore traditional costumes got free wine.

Though they did not go all-in and dress up in a Bulgarian national costume (participants who did were treated to free wine), Marines said they found the history lesson and unique events to be a nice break from their typical training.

"The mountain climb was the main event and had to be the most memorable for most of the Marines. The challenge of carrying that much weight on your back up a rough trail that is steep was very tough," said Capt. Kevin Stuart, a civil affairs officer with the unit. "Getting to the top of the trail with everyone cheering was truly exhilarating to know that we just accomplished a difficult feat and had instead respect for warriors past embedded in Bulgarian's history."

The 1st Battalion, 8th Marines deployed with the Black Sea Rotational Force in January. The 700 Marines provide partnership and muscle in Eastern Europe, where they train allies and serve as a rapid crisis response force. The BSRF in the latter half of 2015 completed seven multilateral exercises and almost 50 joint military engagements in more than 10 European countries.

Decisions from the Naval Discharge Review Board since March 2, 2012, will automatically be reviewed if the applicant didn’t receive an upgrade to honorable discharge. Sailors and Marines who were separated before that time can reapply.

The House version of the defense policy bill would create a “basic needs allowance” to supplement troops with a household income of less than 130 percent of the federal poverty line.

After a CNN article reported that CENTCOM disputed an Air Force press release that claimed there had been an attempted hijacking during the HKIA evacuations, the press release was scrubbed of any mention of the incident.

China and Russia are united in opposing the dominant U.S. influence in global affairs.

Groundwater from 13 Department of Defense sites in the Gulf of Mexico has been confirmed to contain high levels of "forever chemicals."