Trump pledges to build a Marine Corps that can win two wars. At the same time.

By Jeff Schogol
U.S. Marines attending Infantry Squad Leaders Course, School of Infantry, West, open fire after taking contact in a mock insurgency drill on the Army's Kahuku Training Area, Hawaii, Aug. 31, 2011.The mission of ISLC is to train infantrymen to be able to take charge of Marines in a combat environment.

President-elect Donald Trump wants to build a larger Marine Corps capable of simultaneously winning two wars, a build-up that would upend the service's plan to remain at their post-drawdown force of 182,000 Marines.

"We will build a Marine Corps based on 36 battalions, which the Heritage Foundation notes is the minimum needed to deal with major contingencies," Trump said at the Sept. 7 speech where he laid out his vision for a larger military.

The incoming administration's plans will likely render the Marine Corps' ongoing force structure review out-of-date, as it's based on sticking with the current force of 24 active-duty infantry battalions, two active-duty tank battalions and other units that support the service's ground combat element mission. 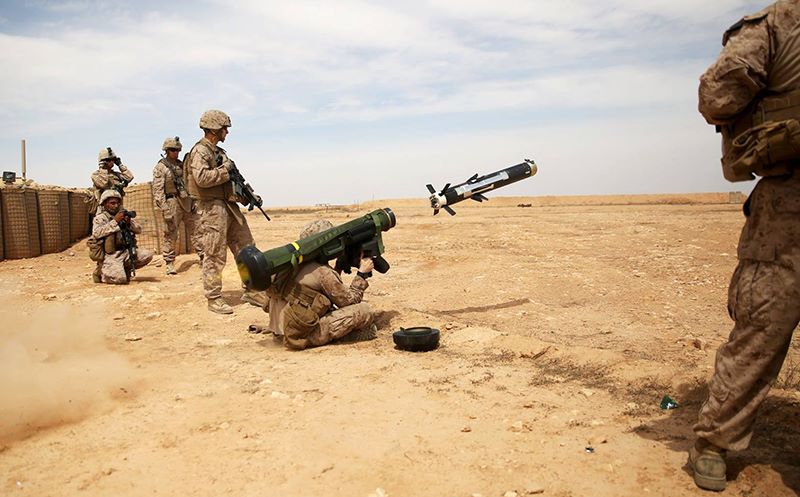 A missileman with 2nd Battalion, 7th Marines, assigned to Task Force Al Asad, fires a FGM-148 Javelin missile at simulated enemy armored targets during a combined-arms training exercise at Al Asad Air Base, Iraq, on April 3.
Photo Credit: Cpl. Carson Gramley/Marine Corps
Still, Marine Corps Commandant Gen. Robert Neller has said he could find a lot of uses if he had funding for more Marines, an effort likely to cost upward of $1 billion a year.

"It would be great if we could have the resources to have 190,000 Marines, but we’re not assuming that," Neller said in August, when he spoke at the Center for Strategic and International Studies think tank in Washington."That’s a decision that’s not in my job jar. So we’re going to operate under the assumption that we’re going to have 182,000 Marines because that’s what we’ve been resourced for. So we’ve got to figure out how we’re going to reshape this Marine Corps."

For the moment, the Marine Corps’ plans remain unchanged, but it remains to be seen what will happen when the new president takes office.

"We've been focused on transition and the new administration, but it's too early to lay out specific numbers if we were to grow," said Neller’s spokesman Lt. Col. Eric Dent.

A retired Marine officer is the principal author of the review for the conservative Heritage Foundation think tank that recommends the Marine Corps grow to 36 active-duty infantry battalions and add one active-duty tank battalion.

"We say that the United States needs to have the ability to handle two wars – not that we’re saying that we’re going to be in two wars simultaneously, but if you only have a one-war force and you have to commit to it, that’s everything," said Dakota Wood, a retired Marine lieutenant colonel, in a phone interview after the election.

Traditionally, the Marine Corps has committed 15 battalions to conflicts such as Vietnam and the Gulf War, Wood said. Having 30 battalions plus an extra six for units that are training or otherwise unavailable to deploy would allow the Marines to be more than a one-war force, he said.

Currently, 31,277 Marines are forward deployed, and that translates to about 17 percent of the service's active-duty force, said Marine Corps spokeswoman 1st Lt. Danielle Phillips. Of those Marines deployed, 7,365 are aboard Navy ships and most are part of Marine expeditionary units, she said.

The Marine Corps' proposed budget for fiscal 2017 called for about $13 billion in spending for personnel costs to support a force of 182,000 Marines. A battalion typically has 900 Marines, so an additional 12 infantry battalions and one tank battalion could increase the Marine Corps' end strength to 193,700.

Using the fiscal 2017 personnel costs as a base, the addition of 11,700 Marines could add nearly $1 billion per year extra just in personnel costs, before equipment and training are factored in.

The Marine Corps also needs more "muscle," in terms of heavy firepower and armor units, and that is why the Heritage Foundation is recommending the service have a total of three active-duty tank battalions, as it did in the 1990s, he said.

"Armor is almost always useful," he said. "Since one cannot predict where a crisis will emerge, having armor at-hand and associated with permanently stationed forces makes sense. It also enables routine interaction/training, important for the force to have some level of familiarity and competence in combined arms operations."

Marines with the Bulgaria-based Combined Arms Company fire an M1A1 Abrams tank during a field training exercise in Eastern Europe. The new Marine unit was stood up last year to assure allies in the region concerned about Russian aggression.

Rep. Duncan Hunter, a Marine veteran, said he welcomes the idea of increasing the size of the Marine Corps, but the more immediate concern is ending across-the-board cuts known as sequestration and giving the service more money for training and maintenance.

"Let’s listen to the Marine Corps," he said. "I think the Marine Corps would say: ‘That’s all great, absolutely; we would love to have those numbers, but we also need maintenance funding.’"

Hunter also said that the size of the Marine Corps should be dictated by what President Trump wants to do.

"I think, finally, for the first time in eight years we’re going to have an overall plan of what our goals are throughout the world and overlay that with our military and what our availabilities are for everybody," he said.

The Corps is nearing the end of a force structure review that looks at how the service can dedicate more Marines to deal with emerging threats without having any more Marines.

After more than a decade of fighting, Marines have become experts at fighting insurgents and terrorists, but the service needs to dedicate more Marines to missions essential for fighting near-peer adversaries, Neller said in September.

Marine Corps Force 2025 is the service’s ongoing review of how it can re-purpose Marines for different missions and whether to update military occupational specialties to reflect new technologies and responsibilities that will be added.

"I think we’ve got a good idea of the capability sets that we need to either grow or add," Neller told Marine Corps Times in September. "It’s information operations, cyber, electronic warfare, deception, intelligence, ISR [intelligence, surveillance and reconnaissance]. We want to make sure we’ve got enough engineering, mobility, counter mobility."

Neller has consistently said he does not expect Congress to give the Marine Corps funding to grow beyond its active-duty end strength, which will be 182,000 Marines by the end of fiscal 2017.

If Trump decides to increase the size of all of the military services, it doesn’t mean that the Marine Corps’ force structure review needs to be abandoned, Wood said.

"If the new administration comes in and says: ‘We’re going to spend more on the military to be able to reverse the declines generated by sequester and to expand its capacity to handle new missions, like cyber;’ then the Marine Corps would go back and say: ‘Oh, I have a larger bank account; I can have more Marines,’" Wood said.

By getting larger, the service would also be able to give Marines more dwell time at home between deployments, he said.

"The Marine Corps has said: ‘We’re at 1:2 deployment to dwell ratio; it’s wearing out the force,’" Wood said. "Any smaller and it will have to go to 1:1. They would like to get back to a 1:3: so one deployment cycle and then two or three back home – seven months out, 21 months back. But you have to be able to grow the force beyond its current 180,000 level."

The thought behind the program is erect a barrier between a person’s suicidal impulse and taking action on that impulse.

Several popular parks sites have shifted to a lottery system for admission to control crowd sizes.

Veterans unemployment under 3% for seventh month in a row

It's the best stretch of employment news for veterans since 2000.

This Coast Guardsman became a millionaire with his Thrift Savings Plan

This military TSP millionaire said his parents encouraged him to start saving part of his salary early, and it's paid off for him.

Feres helps military avoid accountability for harm. New ruling could be a chance for justice.

For decades, the Feres doctrine has protected the military from lawsuits over things like training mishaps, medical malpractice, and sexual assault.

The Marine Corps has a swimming problem. Is there a plan to fix it?

Marines: This might be your new physical training uniform

Marines call on CMC to bring back silkies and tattoos