The cult of Mad Dog Mattis has a quirky business line, and the general is OK with it

By Jeff Schogol and Oriana Pawlyk

Marines and veterans are cashing in on gear that pays tribute to retired Marine Gen. James "Mad Dog" Mattis, who for years has been one of his generation's most beloved generals.

Now, after President-elect Donald Trump has nominated the storied general for the Pentagon's top job, the value of Mattis' name and image is likely to soar.

Marine veteran Shawn Wylde boasts that he offers "the biggest selection of Mad Dog gear" through two e-commerce websites: AAF Nation and OAF Nation. He also owns the domain name for "GeneralMattis.com and he runs the "Legend of General Mattis" Facebook page.

Since news broke that Mattis would be President-elect Donald Trump’s nominee for defense secretary, sales of all things Mattis have spiked "1775 percent," Wylde joked, referring to the year the Marine Corps was founded.

Wylde explained why Mattis is so popular among service members and veterans: "He’s our warrior Lord and savior. He rose from retirement."

One of the most popular items among Mattis aficionados is a poster of "Saint Mattis of Quantico, Patron Saint of Chaos," which was posted on the Marine Corps Special Operations Command Facebook page on Thursday.

Marines keep placing the poster on the unit command board, which shows the chain of command from the president on down, and posting pictures online, said Wylde, a former captain.

"People are putting that picture of Gen. Mattis above the president," he said. "Those pictures are pretty viral right now."

Mattis gear is consistently AAF Nation's top selling products, and they have even sold out of certain items, Wylde said.

"The Patron Saint of Chaos poster has sold out numerous times since its release!" he said.  "We also the illustration to the public online without a watermark so Marines can print it out and create the memes of their dreams. "

Not all Mattis gear is sold for profit. Last year, Mattis autographed a pair of "silkies," the Marine athletic shorts, which will be auctioned off to raise money for the MARSOC Foundation, Wylde said. His companies will match bids up to $20,000, he said.

"I still have them locked up in a safe," Wylde said.

But some experts warn that it's a risky business and those would-be entrepreneurs could face lawsuits for doing so.

A quick web search for merchandise honoring Mattis reveals everything from T-shirts to mugs to bumper stickers. Until recently, a Mattis fan could even purchase a pencil skirt featuring the general's face above his call sign: "Chaos."

A "Vote for Mattis" T-shirt is available for purchase on a veteran-run website, Ranger Up.

"The Cult of Mattis has only grown since his retirement," wrote Jack Mandaville, Ranger Up brand manager, under the product’s description. "Mattis was our guy — a highly recognizable figure in our war. His legend and the legacy of the [Global War on Terrorism] Veteran goes hand in hand."

"The shirt is simply a measure of respect for a man that is universally loved across all branches," Nick Palmisciano, a former Ranger-qualified Army infantry captain and founder of Ranger Up, said in an email to Military Times." More than half of Ranger Up's customers are military service members or come from military families, he said.

Mattis is not the first general to be idolized by troops. Before the Mattis trend, there were T-shirt endorsements for former Chairman of the Joint Chiefs of Staff retired Army Gen. Colin Powell and Gen. David Petraeus, the former commander of U.S. forces in Iraq and Afghanistan. Yet Mattis has become more acclaimed than other generals who have been merchandised and his fans show a distinct intensity.

WHAT YOU LOSE, IF YOU LOSE

But is selling this kind of merchandise legal?

"You really have to look at the exact usage of the image, because a T-shirt could be a product or it could be the vehicle in which to make a commentary or criticism," said Daliah Saper of Saper Law Offices, a firm specializing in intellectual property, social media, entertainment and business law.

If it is a product or an advertisement, that's not permitted.  But if the image is used in some expressive manner, that might be protected by the First Amendment.

But claims about freedom of speech do not stop miffed public figures from filing civil lawsuits. And service members cashing in should know the limitations and repercussions in case one day a military general says: "That's enough."

Politicians and public figures — aside from Hollywood celebrities, here and there — don't often bring attention to themselves by filing a lawsuit for the distribution of their image or likeness. But here's where the distribution of products can get slippery.

"The right of publicity varies, depending on where you are. But generally if you take somebody's name, likeness, persona, or voice, and use without their consent in a commercial way, that's a violation of that person's right of publicity," said Susan Progoff, an attorney and partner at Dorsey & Whitney.

The right of publicity is a creature of state — not federal — law, Progoff explained. More than half of the states recognize a claim for the right of publicity, although the nature and scope of that right can vary. It can fall under a right to privacy, which can prohibit unauthorized use of a person's name or likeness. In other states, the issue be viewed as a wrongful attempt to suggest a product is associated with an individual.

Claims for violation of an individual's right of publicity may be argued in a civil lawsuit claiming monetary damages for the violation, but there are exemptions, or defenses against the claim.

Using a person's image is allowed for strictly non-commercial purposes, such as for use in news, public affairs, a sports broadcast, or a political campaign. And, this may apply to political speech that happens to be on a commercial product, Saper said.

Another defense to the right of publicity is for works of fine art. However, "usually putting someone's picture on a commercial product, like a T-shirt or poster, is not considered to be fine art," Progoff said.

Famous people like Mattis could file a lawsuit, but it's pretty hard "to quantify damages," Saper said.

"Either it's hard to quantify damages, or the damages could be really high," she said. "If you're a business and you have deep pockets, one of the remedies is that the company might actually have to give [the person whose image they used] damages for every item sold that has his picture on it, and that's a pretty scary prospect."

But, so far, lovers of Mattis gear can breathe easy because he sees the fun of this too.  The retired general told Military Times earlier this year that some members of the military have reached out to him in the past asking if they could use him as an inspiration behind their designs and merchandise.

"I mean, I've said some of these things publicly," Mattis said in an interview earlier this year before his nomination for defense secretary. "This is kind of like freedom, they can do what they want with it." 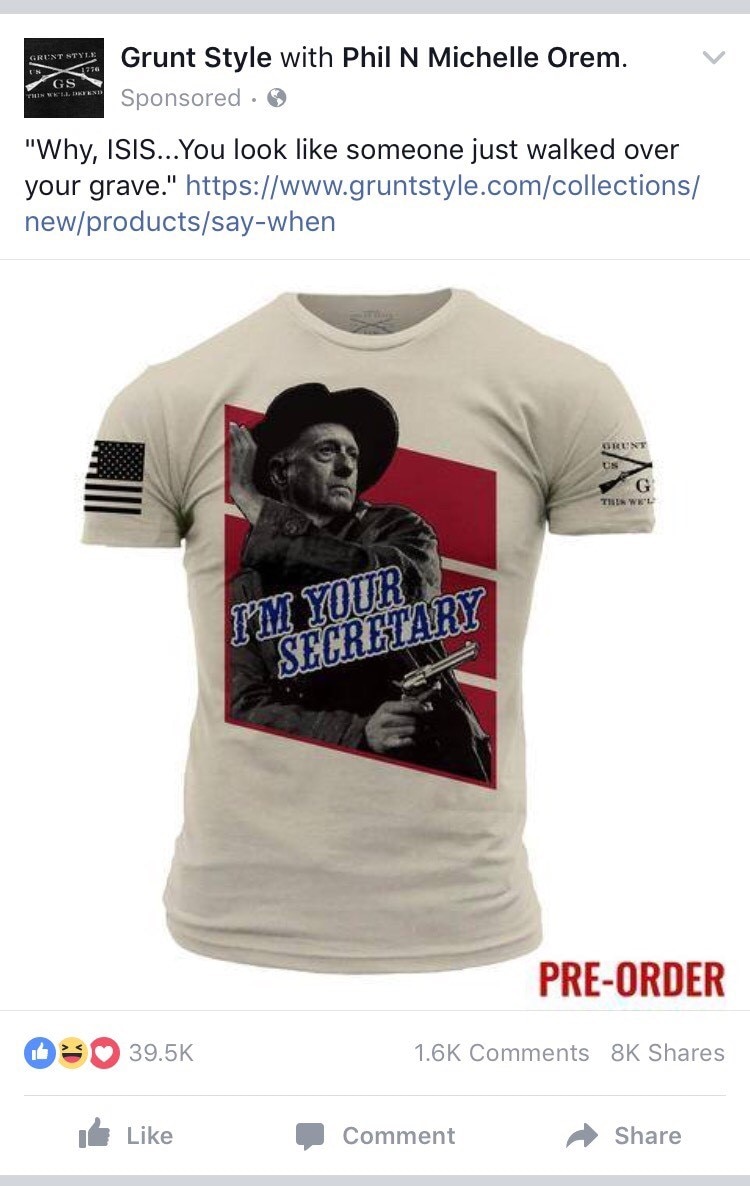 Pre-order now! This screen grab from Grunt Style shows a new Mattis T-shirt, ready to purchase.
THERE WILL (PROBABLY) BE MORE

Mattis has said he'd like to see some of the proceeds made from the products go to veterans organizations or foundations, but he's not too concerned with how his image is broadcasted.

But some Marines say, if given the chance, they would rally around a Mattis design.

"Personally, I am unable to name another public official that embodies honesty and toughness to the point that we would want to wear shirts with their face on them," said veteran Sgt. Brad Bitler, who left the Marine Corps in 2007.

Bitler, who said he met Mattis a few times while serving in Iraq, debuted his own Mattis shirt. He also promotes his Mattis merchandise through a Corps-inspired online game, "KnifeHand."

"If General Mattis ever had a problem with it, of course I would take it down, but ...with the various online communities, he's just propagating more and more," Bitler said.

"The legend that he projects is pretty accurate to who he is — he's a showstopper."

The civilian man initially had no pulse, and bystanders told the Marine they assumed he was dead.

3D animation shows the inner-workings of an AR-15

The video explains why the rifle is such an efficient, and ultimately dangerous, weapon.

Everything we know Gen. Milley has told the Jan. 6 panel

Here is all of the publicly released testimony by the chairman of the Joint Chiefs of Staff, in one place.

These drones can remain airborne until a target is identified ― at which point they set a course for that target and go out in a blaze of glory.

The seven-month underway spanned the Pacific Ocean and included exercises with Japan and other nations.

3M sold its Combat Arms earplugs to every branch of the armed forces, but design defects may have caused hearing loss for service members.

Military sexual assault survivors should be able to sue for damages, judges rule

A lawsuit against the former vice chairman of the Joint Chiefs could now go to trial.

The report calls out the State Department for deeply underestimating the number of refugees.

Reflecting on burn pits after the passage of the PACT Act

Kelly Kennedy, War Horse managing editor, was the first reporter to cover burn pits and the resulting illnesses in service members returning from Iraq and Afghanistan.

Biden called the PACT Act one of the most important changes to veteran support policies in decades.

Short term savings – What is a CD? — Money Minute

Jeopardizing national security: What is happening to our Marine Corps?