Hundreds crowded the small chapel Friday at the Oregon Trail Veterans Cemetery to honor the 101-year-old Marine, who’d told friends he had no family. Parked cars lined both sides of the road and snaked a mile away from the cemetery’s gates. A charter bus, full of people from Sheridan, unloaded as the service began. Strangers — mourners — spilled out of the chapel’s front doors and listened to the service on the snowy lawn.

Inside, there was room only to stand, pressed against the walls.

WWII Marine veteran without family to be buried in Wyoming

A Marine Corps veteran who served during World War II and died at age 101 with no known family is expected to be buried in Wyoming.

Casper Police Chief Keith McPheeters read a letter from Gov. Mark Gordon. Gordon echoed Ray’s belief that he was alone but for his friends.

But the truth is that he didn’t outlive all of his family. For years, that family had thought they’d outlived him, and for years, they had searched for him. He’d vanished after he’d enlisted in the Marines and was shipped overseas in 1942. Maybe he’d died in the Pacific, where he had stops across the islands that Marines wrestled from the Japanese. Maybe Ray died after he came home.

“He was lost for years and years,” his niece, Anita Ford, said Friday, after the service. "My mom tried to look for him.

“I don’t know why he left, or anything,” she added. “But I used to hear my mom cry sometimes. That’s an awful feeling.”

Ray’s family — Anita and a group of grandnieces and grandnephews — filled the front pews of the chapel. Anita lives in Pueblo, Colorado. Her niece Melissa Mascarenas is from Fort Collins. Anita’s nephew is from South Dakota. They first heard that Ray hadn’t vanished when they’d read that he’d died earlier this month.

“It feels like we missed so much,” Melissa said, standing in a pew after the service. “And we were only three hours away.”

Anita said her mother — Ray’s sister — had put a notice in the Denver Post when Ray’s brother died, on the off chance Ray would see it. She harbored resentment against the Japanese, who fought the Marines in the Pacific. Anita says she understands that pain.

“Now I understand a lot of things,” she said. 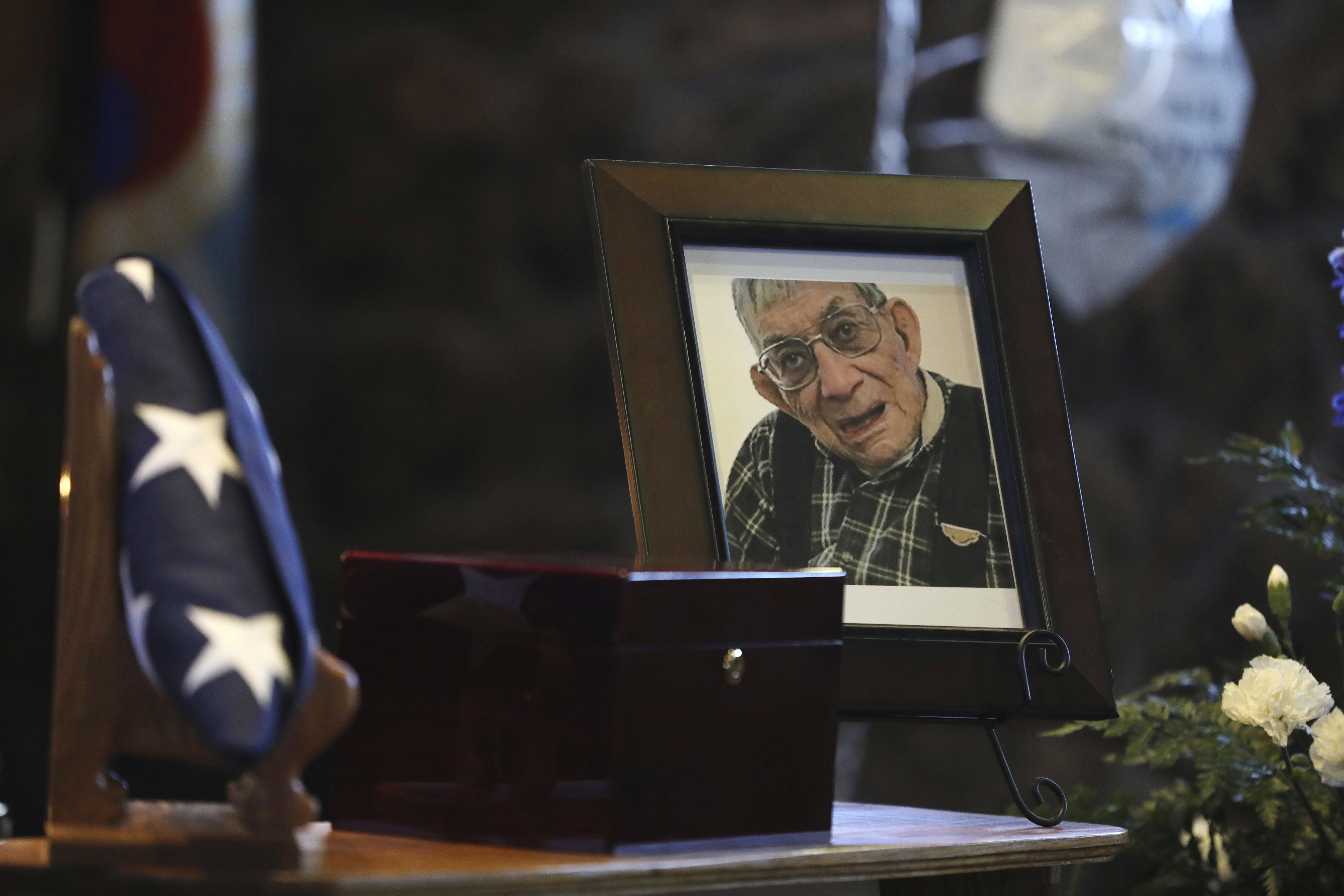 A photograph of Remigio "Ray" Barela is on display next to his remains and a folded flag during a funeral service in his honor at Oregon Trail State Veterans Cemetery in Evansvile, Wyo., on Friday, Feb. 28, 2020. (Cayla Nimmo/The Casper Star-Tribune via AP)
2 of 6 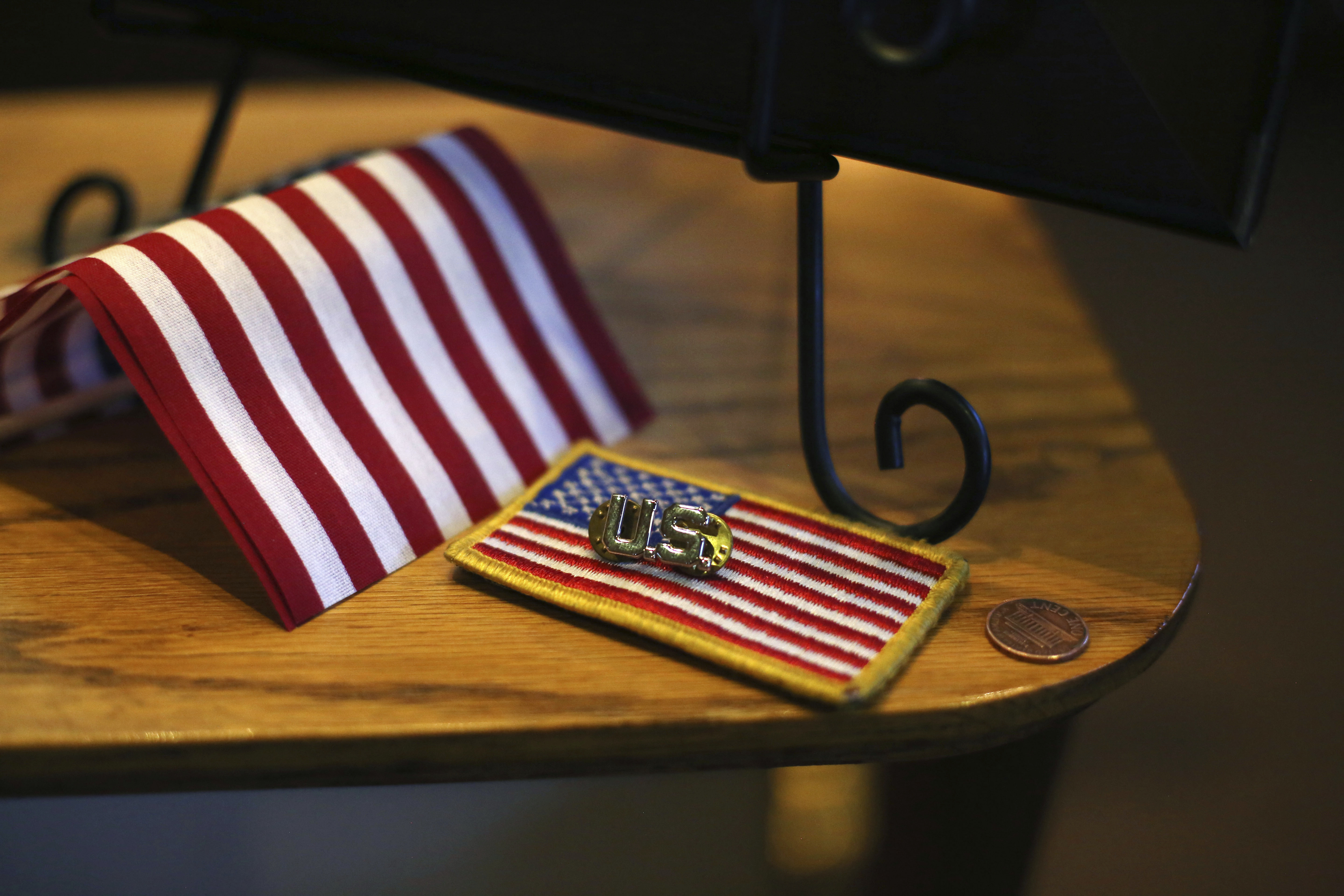 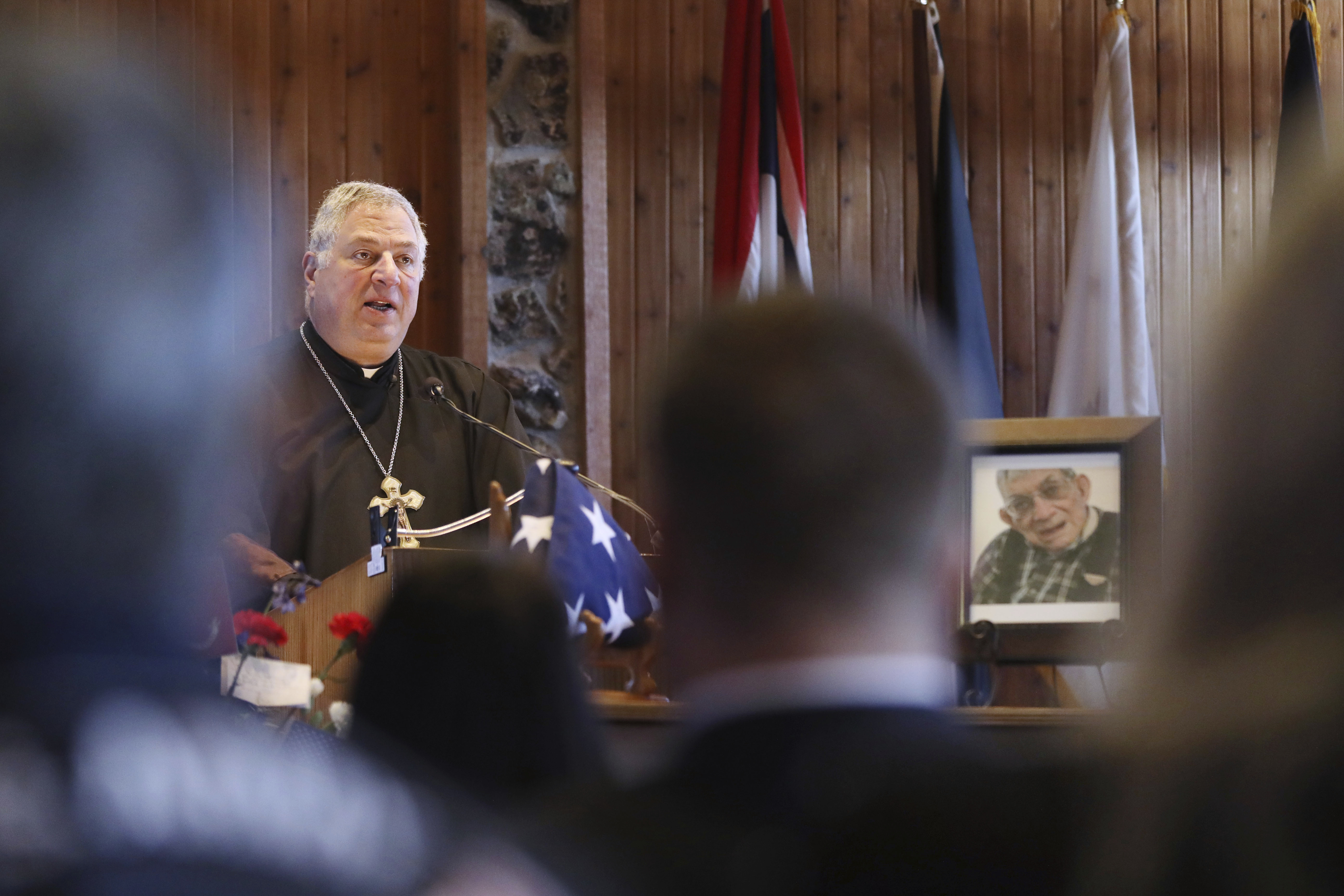 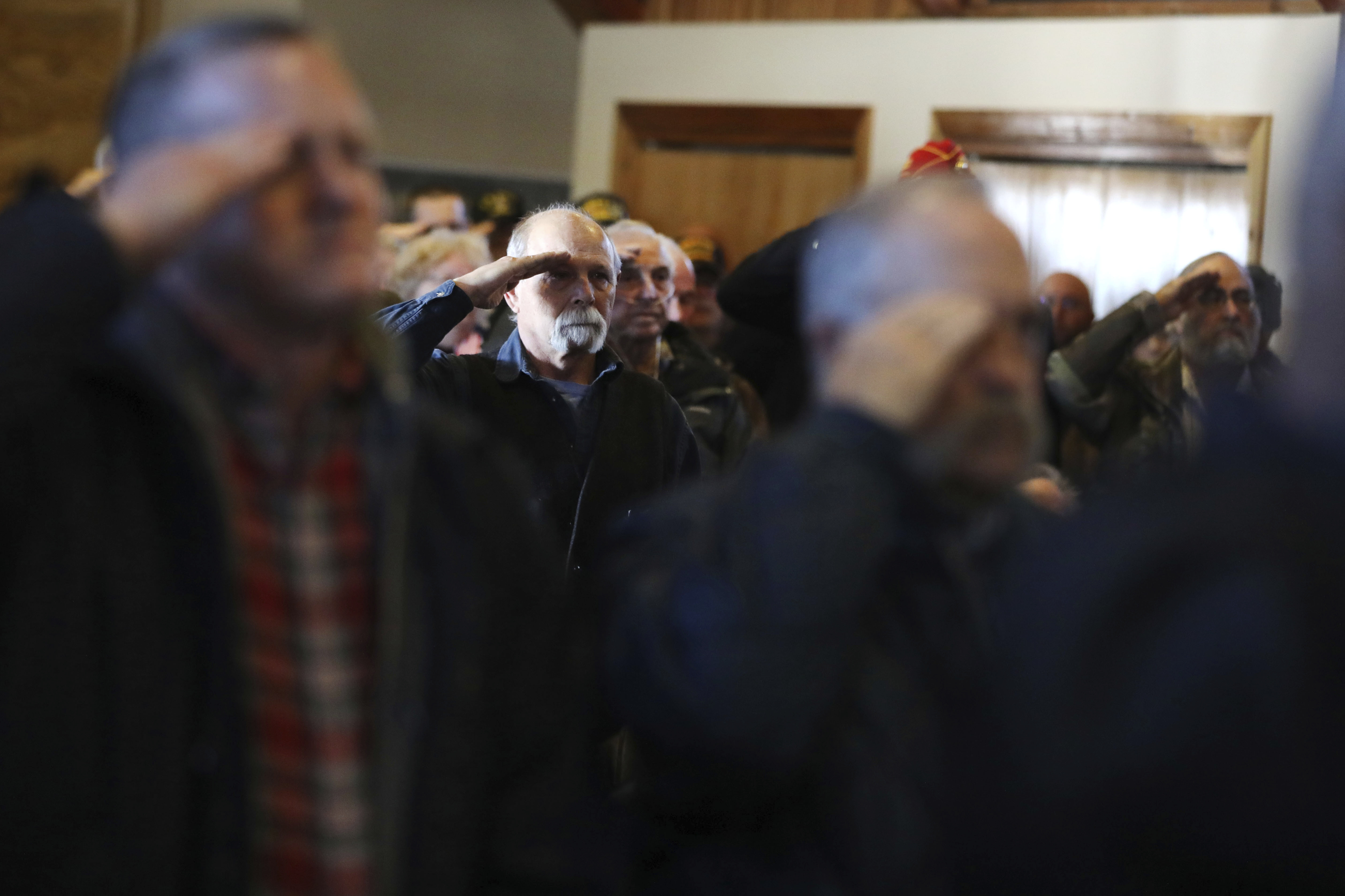 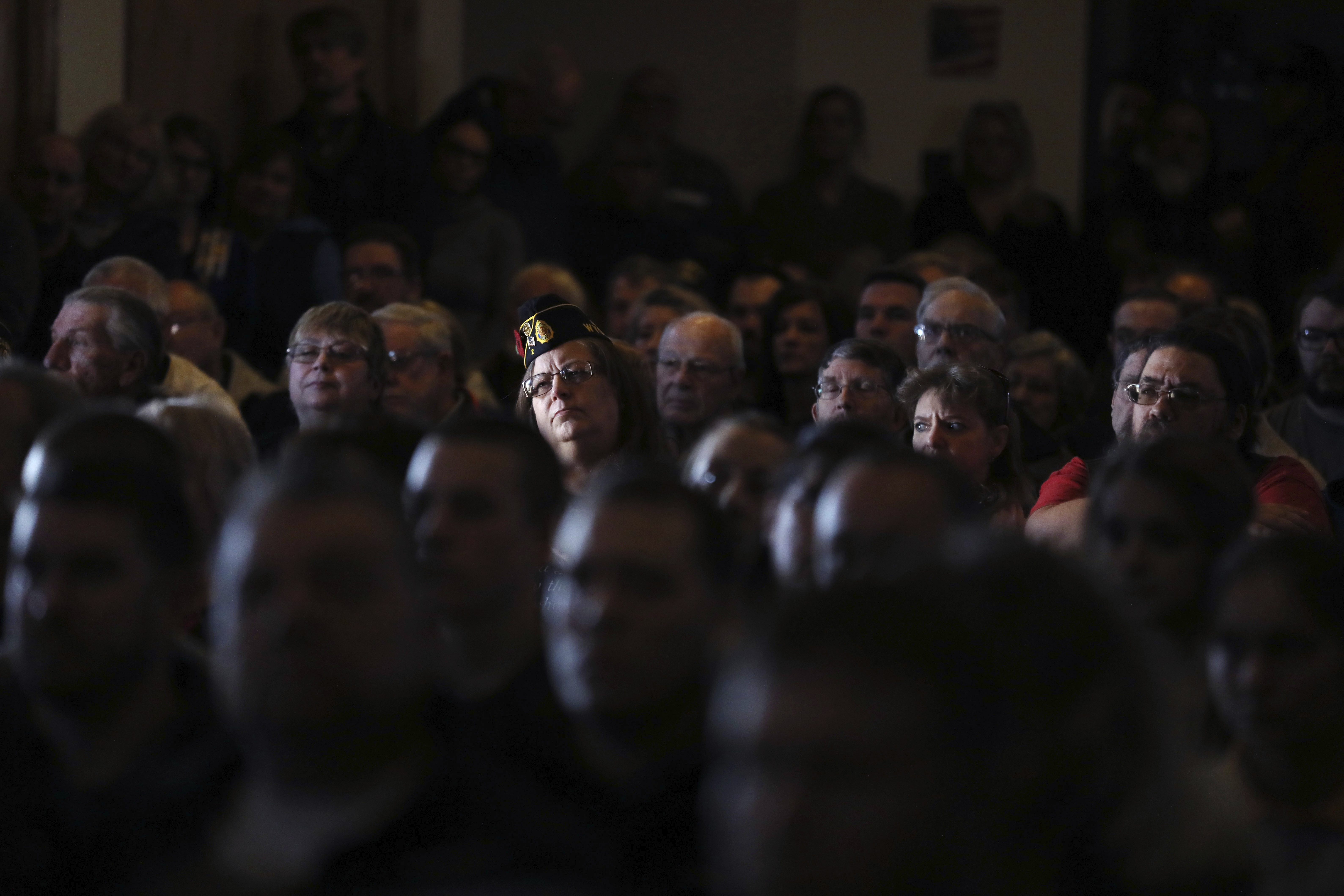 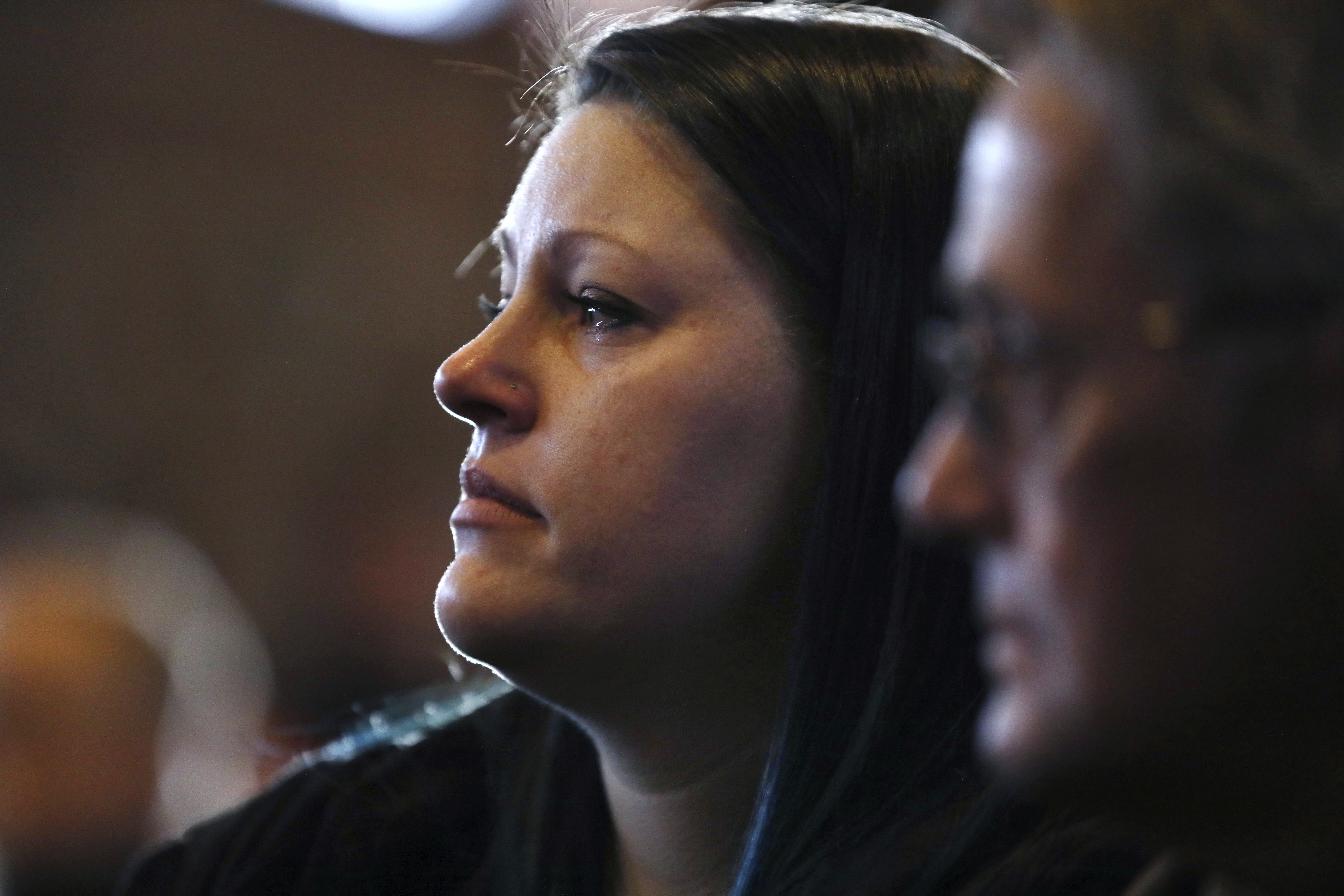 Ray was born in Colorado in 1918. After the war, he was a vegetable picker and a sheep herder. It’s unclear how Ray ended up in Casper. Randy Knudson, Ray’s friend and former landlord, said Ray had tended sheep for years near town. Randy met him in 2013, when Ray moved into the apartments Randy managed. In 2015, Ray had a spell in the hospital and then moved into an assisted-living facility.

“I took him as my own dad, took care of him a little bit,” Randy said. “When my dad passed away, I let (Ray) wear my dad’s military hat. He took great pride in being a Marine.”

Ray liked Fox News, dogs, horses and cookies, those holiday ones in the metal tins. He didn’t like people as much, Randy said. He liked to be alone.

If he could’ve seen his own funeral, he wouldn’t believe the turnout, Randy said. He wouldn’t have wanted to be here if he could have.

For some veterans, strangers are family at burial services

There were no relatives at Vietnam veteran Stephen Jerald Spicer’s funeral, but his passing didn’t go unnoticed as a few dozen patriotic strangers showed up to honor his service.

The service had been a big affair. Hundreds had crowded in and around the chapel. His picture was at the front, alongside a scarlet box containing his cremains and a folded American flag. The honor guard fired three rifles. A bugle played taps. Veterans in the audience stood and saluted. Four bagpipers marched to the front of the room, along with a boy carrying a drum. They played “Amazing Grace,” while the boy stood alongside them and tapped his drumsticks on the lip of his drum, the sound rising and falling alongside the deafening pipes.

After they marched out, men and women sniffled in the silence that the pipers left. A man in a suit and a triangular Veterans of Foreign Wars hat removed his glasses and wiped his eyes. Two Marines unfolded and then refolded the flag and presented it to Mike Byers of the Patriot Guard. Byers had put out a call earlier in the week, pleading for people to come and mourn Ray, to come shed a tear over a Marine with no family.

The service ended, and the mourners filed out. The charter bus filled back up and steamed back out. The row of firetrucks and police cars pulled away. The road leading up to the cemetery began to look less like a parking lot. Somewhere out of sight, one piper continued to play, the music quieted by the wind.

About Seth Klaman, Casper (Wyo.) Star-Tribune via the AP

A bigger Navy, some stolen valor and the Marines recruit Gen Z ― The Briefing, 9.24.20

The Secretary of Defense lends support for a Navy big enough to push back China, and the Army sends troops to elbow back Russians in Syria. Meanwhile, a Medal of Honor recipient gets an ugly surprise on returning from a trip, and how should the Marine Corps try to court Gen Zers? Check out its latest ad. All that and more on The Briefing for 9.24.2020.
Close
Now Playing

What troops think of Biden and Trump, and a shark joins swim call - The Briefing, 9.3.20