By Matthew L. Schehl
U.S. Marines with Special Purpose Marine Air-Ground Task Force-Southern Command unload medical supplies from a CH-53 Echo Super Stallion in Puerto Lempira, Honduras, Sept. 11, 2015. The medical supplies will be used for a community relations event. SPMAGTF-SC is a temporary deployment of Marines and Sailors throughout Honduras, El Salvador, Guatemala, and Belize with a focus on building and maintaining partnership capacity with each country through shared values, challenges, and responsibility. (U.S. Marine Corps Photo by Cpl. Shakeasha Payton/Released) 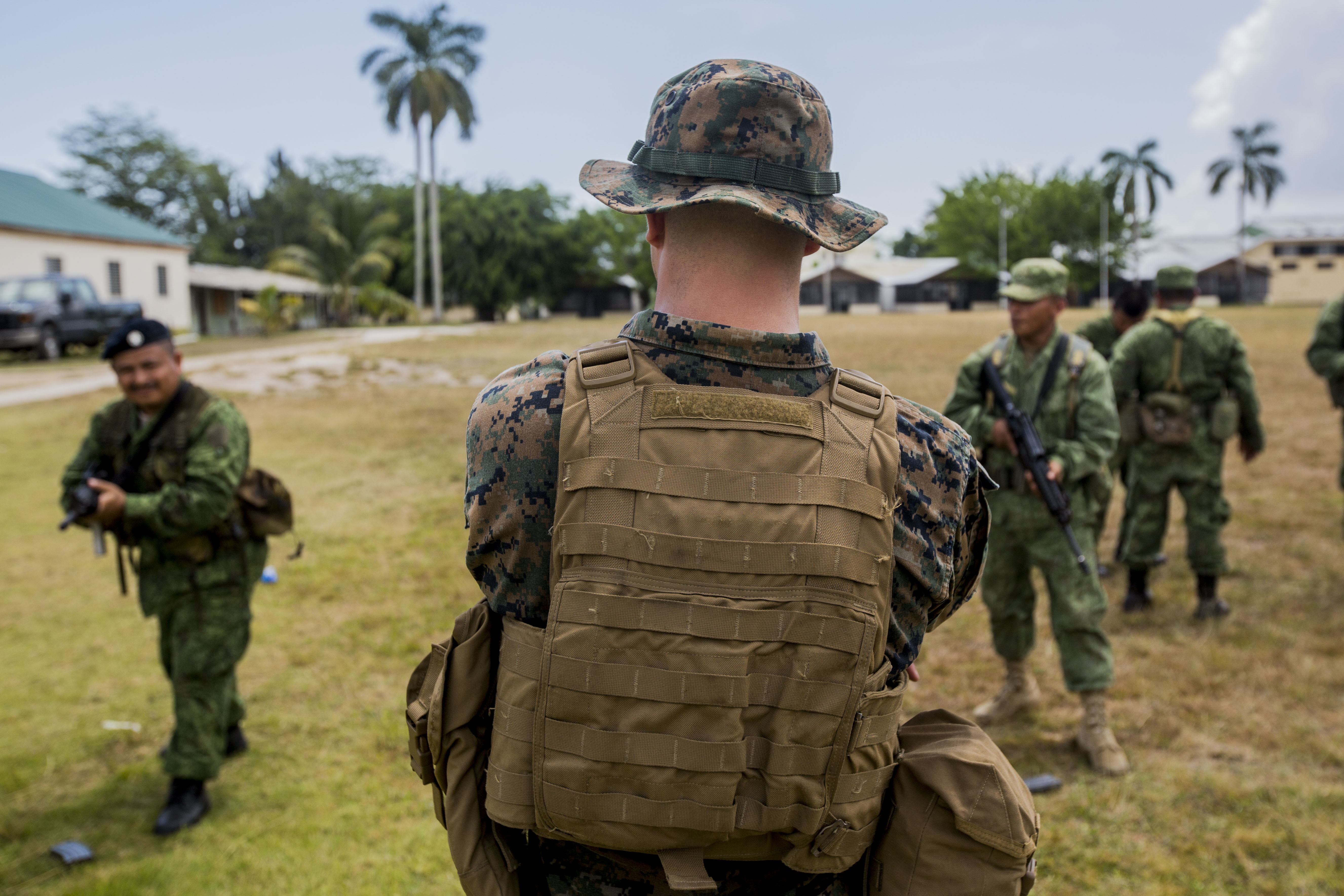 About 300 Marine reservists are headed ing Camp Lejeune this week for Central America this week, where they’ll train local up security troops forces struggling against gang violence and drug cartels and stand ready to help in the event of a hurricanes or other natural disasters.

Members of the recently formed Special Purpose Marine Air-Ground Task Force—Southern Command will set up headquarters for the six-month deployment at the Soto Cano air base in Honduras. From there, they’ll dispatch small advisory teams of grunts and engineers throughout the region.

In all, tThe Marines come from 42 different units across 20 states, marking this the first time Marine Corps Forces Reserves will take the lead of the annual rotation.

The Marine Corps kicked off its first rotation of this size in Central America last year, and it included first MAGTF was stood up last year almost all completely with active-duty personnel. But reservists bring a host of civilian skills in addition to their military occupational specialties, said Col. Thomas Prentice, the task force's SPMAGTF-SC’s commanding officer.

"We have Marines that are software engineers, law enforcement officers and we even have a fashion designer," he said. "The reservists ... comprising this MAGTF bring an additional capability towards being able to accomplish any assigned mission."

They’ll be backed up by four CH-53E Super Stallion helicopters from Marine Heavy Helicopter Squadron 772, 4th Marine Aircraft Wing, which will give them serious lifting power. Since the region can be pummeled during hurricane season, the deployment is timed so the Marines are at the ready in the event of a humanitarian crisis.

"This isn't the standard 'deploy to the other side of the world' mission," he said. "This is really a unique opportunity to enhance our relationship with partner nations that truly are our neighbors."

They'll be backed up by four CH-53E Super Stallion helicopters from Marine Heavy Helicopter Squadron 772, 4th Marine Aircraft Wing, which will give them heavy lifting power. In all, the Marines come from 42 different units across 20 states, making this the first time Marine Forces Reserves will take the lead of the annual rotation.

The first MAGTF was stood up last year almost completely with active duty personnel, but reservists bring a host of civilian skills in addition to their military occupational specialties, Prentice said.

"We have Marines that are software engineers, law enforcement officers and we even have a fashion designer," he said. "The reservists comprising this MAGTF bring an additional capability towards being able to accomplish any assigned mission."

In a region that can be devastated by natural disasters like tropical storms or earthquakes, having Marines and heavy-lift helos on station can go a long way.

"That's the second part of our mission, the 'be prepared to' piece," Prentice said. "That's being prepared to provide humanitarian assistance and disaster relief operations, not only in the northern tier of Central America but throughout Southern Command's area of responsibility."

Central America has been The Marines are on their way to the most troubled countries in the Western Hemisphere, long plagued by poverty, gang violence and on-going struggles with drug cartels. Tens of thousands of women and children have fled for the U.S. border in recent years in order to escape the violence in the countries where the Marines will be operating.

In 2014, tens of thousands of child migrants fled to the U.S. to escape violence, which President Obama called an "urgent humanitarian situation."

Fueled by a surge of gang violence, El Salvador recently surpassed Honduras as having the highest murder rate in the Western Hemisphere, prompting renewed fears of mass migration to the U.S., as reported by the Washington Post.

Last year, about one third of all deportees from the U.S. - 75,479 people - were sent back to Guatemala, Honduras and El Salvador, according to U.S. Immigration and Customs Enforcement statistics.

Those returned to their countries face the same issues as before they left, said Victoria Rietig, a policy analyst with the Migration Policy Institute in Washington, D.C.

"You want to have a job to provide for your family, you want security that enables you to walk in the street without fear, children need access to safe schools," said Victoria Rietig, a policy analyst with the Migration Policy Institute in Washington, D.C. she said. "What you basically need is better development, and that has been the problem of the region for a long time."

The Marines will work alongside local troops to take on some of those issues. Marine combat engineers attempt to take these issues on at the local level, working side-by-side with host nation forces.Engineering teams from the logistics element will train local forces engineers on heavy machinery as they and work on roads, schools and hospitals in Honduras, for example, Prentice said.

"We’re basically on call to the Honduran government," he said. "When they decide there’s a project they’d really like us to work with their engineers on, w... We’ll engage in whatever projects we can to enhance our partnership."

Developing local infrastructure will also lay the groundwork for Alliance for Prosperity, the first joint multi-million dollar project between the U.S., Honduras, Guatemala and El Salvador. The program will help fund schools and government institutions in order to stimulate economic growth in Central America. pour funding hundreds of millions of dollars into local governance, education, economic opportunity and infrastructure to tackle illegal migration at its source.

Infantry teams from the ground element will also fan out across the region through through the countries to advise security forces on the front lines of the drug war. The Marines will train troops on small unit leadership, teaching marksmanship, swimming, land navigation and physical fitness, Prentice said.

"They'll serve as subject matter experts." he said. "They'll advise, mentor and train partner nation counterparts to improve interoperability and build their capacity to plan for and conduct missions."

The ultimate goal of these interactions, Prentice added, is to enable them to provide security and prosperity to their citizens. The Marines have been dispatching security cooperation teams to the region for years in order to help partner militaries train for the challenges ahead.

The Marines' biggest impact on these countries, however, might not come on the rifle range.

The key piece of the deployment is building relationships with the host nation forces, Prentice said.

"The reality is everything we do we're partnered," he said. "This is about these partner nations being in the lead."

Marines being Marines - with a deeply instilled sense of professional pride, work ethic and accountability -

The U.S. has invested heavily in the militaries of these countries for a long time without any decrease in violence though, Rietig noted, adding that primarily. because the local security forces themselves can sometimes create problems have been a big part of the problem. Lack of oversight and transparency, corruption and a record of human rights abuses have not necessarily endeared citizens to their governments.

Overcoming this is something the Marines trained for during their three-month work up for the deployment, which included extensive cultural awareness training and a specialized advisers' advisors’ course at the Marine Corps Security Cooperation Group schoolhouse in at board Fort Story, Virginia.

"Besides the standard ‘we’re ambassadors of the United States and the Corps’, wWe’ll brief the Marines and [We'll] make sure they understand what type of environment they’re going into," he said. "One of the things we’re pushing and we want Marines to understand is that this is a great opportunity to go into another culture and learn."

"When you hear the problems that they are encountering, it makes it so much more understandable," she said. "It puts a face on these nameless statistics and problems."

The George W. Bush Institute is urging the current administration to support programs and resources to help veterans successfully transition to civilian li

China balloon: Many questions about suspected spy in the sky

The massive white orb that drifted across U.S. airspace and was shot down by the military triggered a diplomatic maelstrom and blown up on social media.

An undisclosed number of V-22 Ospreys across three services will halt operations until a component tied to the engine is replaced.

US downs Chinese balloon, a flashpoint in US-China tensions

Biden said he wanted the balloon downed on Wednesday, but was advised the best time for the operation would be when it was over water.

“The Covenant” arrives in theaters in April.

2 Marine Raiders, cleared of homicide, get no punishment for drinking