The pilot of an MV-22B Osprey was at fault for a December 2015 crash aboard the amphibious transport dock New Orleans, an investigation into the incident found.

"The aircraft commander, failed to ensure the safe and orderly execution of the flight to the USS New Orleans," according to the official investigation report, which Marine Corps Times obtained through a Freedom of Information Act request.

One factor in the crash was that the pilot underestimated how much weight the Osprey was carrying, the investigation says.

"He has taken responsibility for this event, and he possesses the ability to benefit the Marine Corps going forward," the investigator wrote. "I recommend the convening authority consider administrative or disciplinary actions as appropriate." 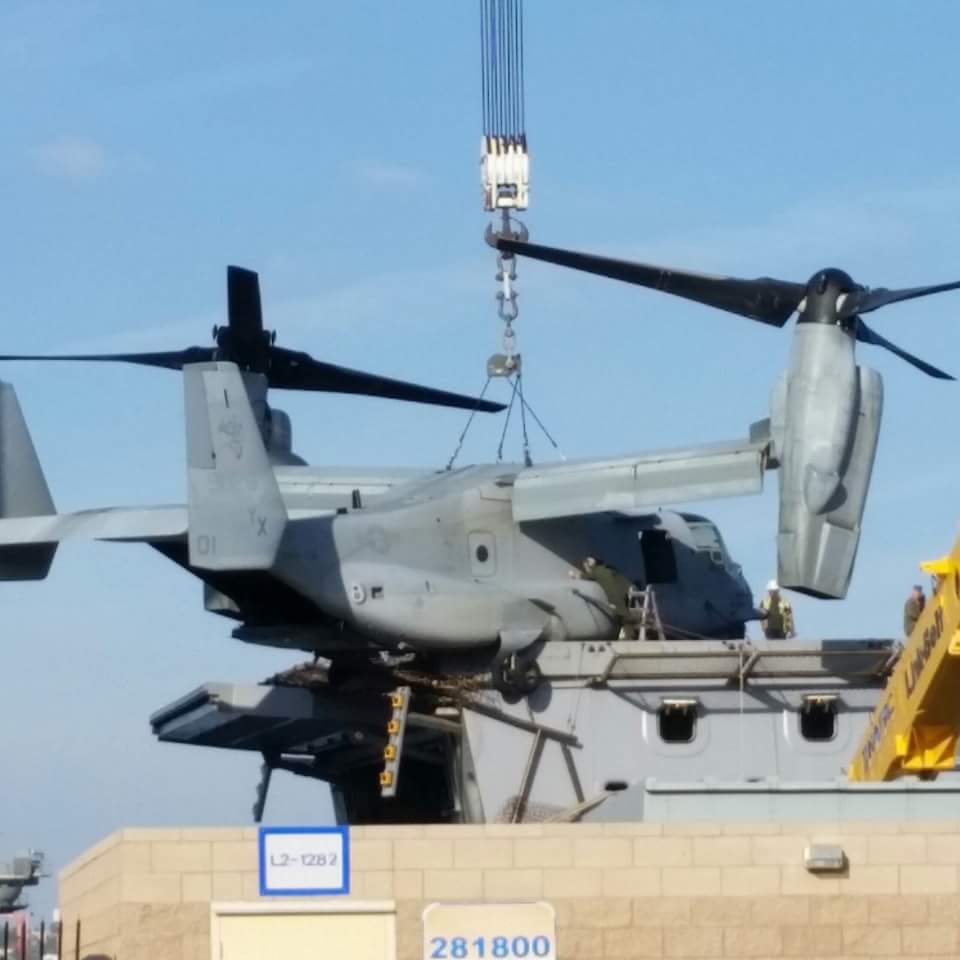 This picture posted on social media shows an MV-22B Osprey being lifted off the deck of the amphibious transport dock New Orleans after a Dec. 9 crash.
Photo Credit: From Reddit with permission of user.

The investigator also determined the co-pilot was not proficient enough to land the Osprey under such difficult conditions.

"I recommend more training in Crew Resource Dynamics and aerodynamics," the investigating officer wrote. "With this experience, Captain [Redacted] could make an influential Aviation Safety Officer."

Both the pilot and co-pilot were put on conditional flight status in January and their deck landing and aircraft commander qualifications were revoked, requiring retraining, the investigation says. The names of both the pilot and the copilot were not released with the report.

When 22 Marines boarded the Osprey, the manifest did not say how much each Marine weighed, the investigation found. The pilot estimated that each Marine weighed about 250 pounds, including gear, but the average weight of each passenger was actually 307 pounds.

Additionally, the pilot took on 9,000 pounds of extra fuel in case the aircraft was unable to land on the New Orleans and had to divert to Marine Corps Air Station Miramar in California, the investigation found.

The pilot and co-pilot were unable to keep the Osprey in the air as it tried to land on the New Oreleans, which was at sea in the Pacific off the coast of California, the investigation found. They managed to fly the aircraft forward and make it on to the ship's deck.

No one aboard the Osprey or the ship was seriously injured in the mishap.

The investigating officer determined that the pilot was "complacent and derelict in his responsibilities," but the commander of the the 13th Marine Expeditionary Unit disagreed.

"Neither the materials contained in this investigation nor the findings ... support assigning culpable neglect or inefficiency in the execution of his duties,"  the commander wrote. "Additionally, complacency is too broad a description and does not accurately describe the moment born out in the statements."

The 13th MEU commander said the crash was the result of a "series of judgment errors" and "a moment of inattentiveness with the co-pilot during final approach."

However, the commander of I Marine Expeditionary Force agreed with the investigating officer about the pilot, writing that he was "derelict in the performance of his duties by a negligence standard."

Troops had to agree to a monthly membership fee before they could get a loan, feds allege.

126 amphibious combat vehicles have been sent to the fleet, all on the West Coast.

Several new buildings are scheduled to be completed as early as next spring.

Can you get an abortion at a VA clinic?

Who got a $500 million new Army tech contract? | Defense Dollars

Will the Marines be the only branch to reach 2022 recruitment numbers?

Report urges improvements in US approach to hostage cases